What is Flow Meter and what are the types of flow meter?

What is a Gas Flow Meter?

Flow meter is an instrument used to determine the existence of a material flow (liquid, gas, powder) in a pipeline. Namely, the flow rate is calculated by accumulating the total mass or volume of the material flowing in a pipeline within a certain period of time which is often called as totalizer. Parameters of the flow of material are measured using a flowmeter then the measured value is sent in the form of numerical data, it can also be forwarded to generate electricity or a signal that can be used as input to control logic or other electrical circuits.

The Coriolis principle states that when a particle in a rotating motion approaches or moves away from the center of rotation, the particle produces an internal force acting on the particle.

Suppose the fluid is flowing into the U-shaped tube at a velocity V and the tube is vibrating at an angular velocity, then by considering a small portion of the fluid at the inlet at a distance r, a force is generated (known as the Coriolis force). 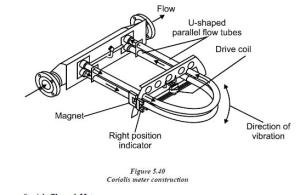 Temperature sensor, this sensor serves to detect the temperature of the passing stream.

Flow sensor (Coriolis), this sensor serves to detect the amount of flow that passes in the process.

Pressure sensor, this sensor serves to detect the amount of working pressure in the Coriolis meter.

This equipment has a function to receive the signal magnitude from the sensor and then convert it into the desired signal and then forward it to the output section.

This equipment is in the form of local indicators that have been adjusted to the wishes of the operator. For example, indicators of the number of flows that have passed or other quantities.

There are several factors that can interfere with the working of a flow meter. They are:

• Electromechanical voltage is intentionally induced in the electrode or liquid.

• Inductive coupling between magnetic components in the system.

There are several types of flow meters based on the type and how it works, they are:

This type of flow meter works in principle using a pressure difference and can be used for both high temperature and high pressure.

Orifice Flow Meter besides can be used to measure the flow of liquid, gas can also be applied to the flow of steam. Flow Meters made of UPVC, PE, and PP or PTFE are very suitable for corrosive chemical flow applications. In this type of Orifice Flowmeter, there are also those that are applied to heavy/viscous material fluids such as slides in the WWT process or measuring gases that have high humidity.

The Glass Tube Flow Meter is widely used for installation applications with vertical systems and the flow rate can be read directly on a glass tube where the glass material is quite good, namely Pyrex glass. This type of Glass Tube Flow Meter is widely used when the fluid pipe installation does not have an adequate horizontal area so it does not really need a large area.

For its application, the Glass Tube Flow Meter can only use maximum at a temperature of 120 degrees Celsius.

An electromagnetic Flowmeter is a type of flow Meter that is used to measure fluids in the form of water or other liquids, whether the flow is corrosive, dirty, and muddy.

Electromagnetic Flowmeters are widely used in liquid measurement applications in the form of liquids and mud, which have electrically conductive properties where the main component of the electromagnetic flowmeter is a flow tube (main element) which is installed by an electric coil both inside the tube and outside the flow tube.

The pressure drop in electromagnetic flowmeters is the same as the flow of liquid through a long pipe, this is because there are no moving parts or obstacles to flow. If the voltmeter is directly installed on the flowmeter tube then it is commonly referred to as a local system or if the voltmeter is installed in another place and is connected by a cable according to the field condition then it is referred to as a remote system.

Magnetic flowmeter in principle uses Faraday’s law of electromagnetic induction. According to this principle, when a conductive medium passes through a magnetic field it will produce a voltage. This voltage is directly proportional to the speed of the conductive medium, the density of the magnetic field, and the length of the conductor. In Faraday’s Law, these three values ​​are multiplied together along with a constant, to produce the magnitude of the voltage. Therefore, the liquid measured by an electromagnetic flowmeter must act as an electric conductor.

The main limitation for Magnetic flowmeters is that they cannot measure hydrocarbons (which are nonconductive), and therefore are not widely used in the oil and gas, and processing industries.

Coriolis Mass Flow Meters are tools for measuring the mass of liquid moving through a particular tube. It is used in engines, where the fuel will move through the fuel lines where the correct amount of oil has to be calculated and every other system where the exact amount of the substance has to be known. Coriolis mass flow meters measure fluid mass, not volume