What is Dead Weight Tester ? How does it work?

What is Dead Weight? 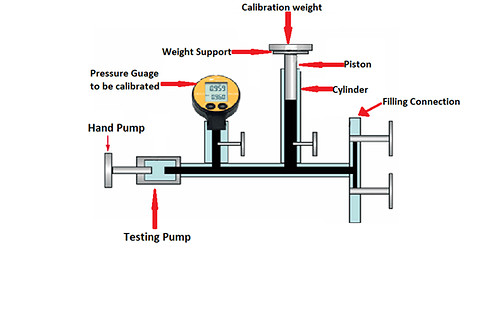 A deadweight tester is a device that measures the weight of a force divided by the area applied to calibrate the pressure.

For deadweight testers, the formula is equal to the pressure, divided by the force applied.

Deadweight testers are a device that measures the piston cylinder type. They are the most accurate instruments for calibrating electronic or mechanical pressure measuring instruments as primary criteria.

They operate on the basic principle that P = F / A, pressure § acts on the known area (A) of a sealed piston and creates a force (F).

The force of this piston is compared to the force exerted by the calibrated load. The use of high quality materials results in small uncertainties of measurement and better long-term stability.

Although most applications are within 1 - 2500 bar, deadweight testers can measure pressures up to 10,000 bar with accuracies of 0.005 percent to 0.1 percent.

The pistons are partly made of tungsten carbide (used for its small temperature coefficient), and the cylinders must conform to a clearance of more than one micrometer to produce the minimum friction. The piston rotates during measurements to further reduce friction.

The testing pump (2) is connected to the test device (3), the original measuring element and the filling socket.

A special hydraulic oil or compressed air or gas such as nitrogen is used as the pressure transfer medium. The measuring piston is loaded with calibrated weight (4). The pressure is generated by an integrated pump (1) or, if an external pressure supply is available until the measured piston (6) loaded through the control valves rises and ‘floats’ in the fluid. This is the point of equilibrium between pressure and mass load.

The piston rotates to minimize friction The pressure exerted by the piston as it rotates can be calculated using a derivative of the formula P = F / A.

The accuracy of the pressure balance is characteristic of the variable span, which is the magnitude of the systematic error and the uncertainty of the magnitude.

They can come up with an intelligent calibrator unit that can register all critical ambient parameters, make readings more accurate and correct them automatically in real time. 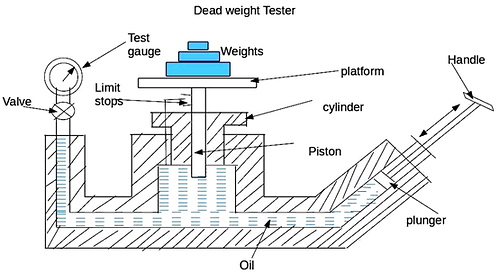 To create this pressure, which is known exactly, the following steps are followed.

The valve of the apparatus is closed.

A known weight is placed on the platform.

Now by operating the plunger, fluid pressure is applied to the other side of the piston until enough force is developed to lift the piston-weight combination.

When this happens, the piston weight combination floats freely within the cylinder between limit stops.

In this condition of equilibrium, the pressure force of fluid is balanced against the gravitational force of the weights puls the friction drag.

g = Acceleration due to gravity ; m/s²

Thus the pressure P which is caused due to the weights placed on the platform is calculated. After calculating P , the plunger is released.

Now the pressure gauge to be calibrated is fitted at an appropriate place on the dead weight tester. The same known weight which was used to calculated P is placed on the platform.

Due to the weight, the piston moves downwards and exerts a pressure P on the fluid.

Now the valve in the apparatus is opened so that the fluid pressure P is transmitted to the gauge, which makes the gauge indicate a pressure value.

This pressure value shown by the gauge should be equal to the known input pressure P. If the gauge indicates some other value other than p the gauge is adjusted so that it reads a value equal to P. Thus the gauge is calibrated.

• It is easy to build and use.

• It can calibrate a wide range of pressure measuring devices.

• Fluid pressure can be easily adjusted by changing the piston cylinder combination or adding weights.

Because of the friction between the piston and the cylinder, as well as the uncertainty of the value of the gravitational constant ‘g,’ the dead weight has an effect on the tester’s accuracy.