What is Building Automation System and What are its components?

What is a Building Automation System?

BAS is an example of a Distributed Control system (DCS) since it is an intelligent system that includes both hardware and software.

Building automation systems (BAS) is a group of tools used by building operations staff to give more effective and efficient control over all building systems.

Building automation systems consist of 5 components. They are

In this article, We are discussing how these components interact and communicate with each other.

A sensor is a device, module, or machine that helps to keep track of environmental changes such as humidity, temperature, lighting levels, smoke in the rooms, and other parameters like people count. After gathering this information, sensors transmit them to other electronics, usually to controllers.

The brain of the building automation system ((BAS) is the controller. They collect all of the data from the sensors and transmit commands to all connected systems, such as HVAC systems, lighting systems, and more, based on that data.

When a command is sent out by the controller, the relays and actuators in the individual systems respond by following the new instructions, if necessary, or requirements.

Each component of a building automation system is connected using a specific language. BACnet and Modus protocols help each component to transmit and receive data in order to alter settings and execute commands change parameters and run commands

Building and facility operators can access the BAS using a user interface or terminal. This terminal assists users in understanding the information exchanged between each component and provides the ability to make manual adjustments.

The displays are visual with photo-realistic graphics.

Major types of Building Management systems are listed below

It is electronic safety equipment used to control access to a particular location. The term “access” can relate to both entering and using something. The term authorization refers to the ability to gain access to a resource. 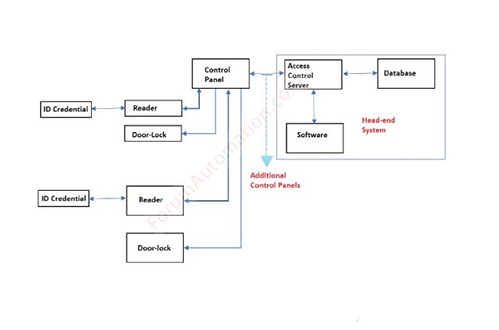 A card reader is an electronic device used to read access cards of an individual and grants access to the user if the company permits. Card readers come in a variety of shapes and sizes, with some requiring card insertion others requiring swipes, and others requiring cards to pass in close proximity to the scanner.

The number of card readers depends upon the number of restricted doors. Card readers are normally positioned on or next to the door that they control.

For additional security, we can add an access card along with the keypads. In this case, we need to enter the secret code after or before swiping the access card it depends on the program installed.

It is the equipment used to lock and unlock each and every door electrically if it’s controlled by the access control system.

This system is mainly designed to control the entrance of a building or a premise. The electric lock system won’t restrict the ability to exit the building freely.

It is also called "Intelligent Controllers”.

CCTV is an abbreviation for closed-circuit television, which is also known as video surveillance. Video cameras are used in CCTV technology to transfer a signal from one location to another and display it on a restricted number of displays or on a computer screen.

CCTV surveillance is very common in many parts of the world for the surveillance. CCTV technology may be used in industrial plants to monitor several stages of a process from a central control station. CCTV systems can be set to run continuously or only when a specific event is being monitored. A more recent version of CCTV, which employs digital video recorders (DVRs), enables long-term recording with a variety of quality and performance options, as well as other capabilities (such as motion detection and email alerts).

Architecture of a CCTV System 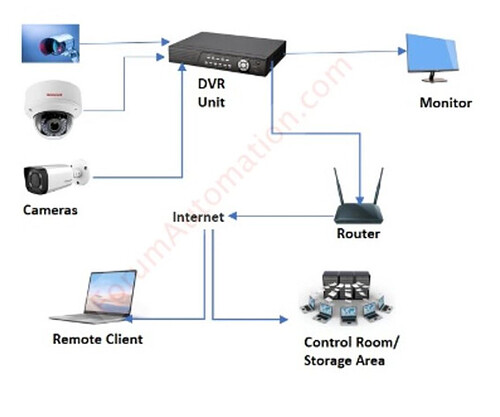 An HVAC is a system that stands for Heating, Ventilation, and Air Conditioning. It is equipment or technology, which helps to monitor and regulate the temperature of a commercial or residential property.

Examples of HVAC Systems are

The main function of an HVAC system is to provide healthy and comfortable interior conditions for occupants.

How does HVAC work?

We know that the main function of an HVAC system is the movement of air. The HVAC system is a combination of AC and central heating systems. It has a single blower to circulate air in a residence via internal ducts, or a ductless system for multiple rooms or zones in the house.

Furnace and heat pump in the home’s air conditioner either capture or creates the heat, then moved by the blower and ductwork.

Climate conditions in most parts of the country require the heating and cooling of outdoor air to ensure sufficient thermal comfort for building occupants, demanding the installation of HVAC systems. The equipment for heating, cooling, and ventilation a building is a complex design decision that must take into account a number of elements, including:

Why HVAC System is needed?

The following are the reasons for the need for the HVAC system.

Occupancy sensors can regulate lighting devices by sensing the presence of people in an area. We can program occupancy sensors to turn on the lights automatically when they detect motion and turn them off after a set length of time if the space is not occupied.

Occupancy detectors are also another name for occupancy sensors.

A dimmer sensor is used to control and change the light’s intensity according to user preferences. By using dimmer controls, users can lighten or darken the room easily. Furthermore, dimmers can be programmed to turn off the lights after a set amount of time. This not only saves energy but also extends the life of Led lamps.

Users can adjust the lighting scenarios in a specific space using integrated lighting controls. It also allows users to customize and configure a lighting scene based on their mood. Several LED lighting manufacturers provide IoT-enabled control solutions that enable customers to control lighting with mobile phones and other internet-enabled devices.