What is Arduino and how to use it in projects?

Arduino is an open-source electrical project platform. Arduino consists of a hardware programmable circuit board (also known as a microcontroller) and software, known as an IDE (Integrated Development Environment), which runs on your computer and IDE helps the user to write and upload computer code to the Arduino board.

With good reason, the Arduino platform has gained in popularity among those just getting started with electronics. The Arduino, unlike most other programmable circuit boards, does not require a separate piece of hardware (known as a programmer) to load fresh code into the board; instead, all that is necessary is a USB cable. In addition, the Arduino IDE uses a simplified version of C++ to make programming easier. 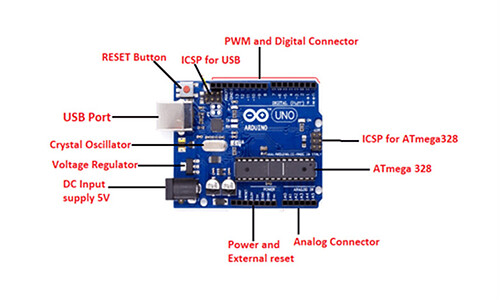 The Arduino Uno is a great way to get started with electronics by doing exciting and engaging projects. This board is your gateway to the Arduino universe: it’s ideal for learning the fundamentals of how sensors and actuators function, as well as for rapid prototyping. The Arduino Uno Rev3 is the most popular and well-documented Arduino board. No one will be left alone thanks to the vibrant and helpful Arduino Uno community.

How to use Arduino in projects?

How to install the Arduino Desktop IDE?

Obstacle Avoiding Robot is an intelligent gadget that can detect obstacles in its path and avoid them by moving in a different direction. This design enables the robot to travel in an unfamiliar environment while avoiding collisions, which is a must for any autonomous mobile robot. Obstacle Avoiding Robots have a wide range of applications, and they are now deployed in almost every military organization to assist with a variety of dangerous tasks that soldiers cannot perform.