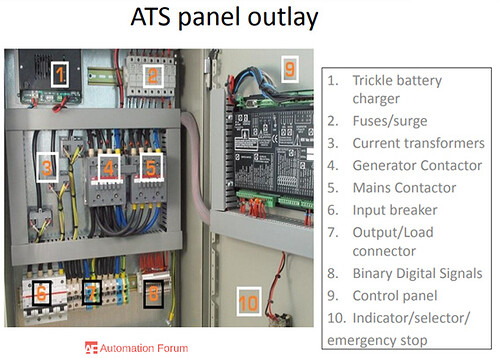 How does an automatic transfer switch work

The automatic transfer switch can transfer load from one power source to another, it senses when the mains supply is interrupted and starts up a secondary supply ATS is also known as a generator transfer switch. ATS has additional circuit components which are mostly in the form of a computer and it can monitor the incoming power supply, voltage sags, power surges, and power spikes. ATS is connected to multiple power supply sources and supplies the load with power from only one of the sources at any particular instant of time. ATS links the load and main supply and this enables the use of either main supply or alternative source when there is outrage on the main source. ATS can maintain a proper supply of the power to the load by automatically activating the generator when there is a need.

What is the difference between an ATS and AMF

The auto main failure is an (AMF) electronic module that can automatically control a standby generator, it can be described as a programmable device which have certain parameters that can be helpful to detect the main failure and can restore the mains too. ATS and AMF have some similarities as both of them can be used to detect the failure and restore the mains. If the AMF controller is in the auto mode of operation then it does the whole control of the engine and generator. ATS doesn’t have the features to monitor the whole parameters of the engine but it does the switching in a safe way the load to the mains or generator.

Voltage regulation of the back-up source should be between the permissible ranges and it could be fulfilled by using an automatic voltage regulator unit to control the excitation of the generator. The frequency of the generator is determined by the speed of the driving engine which is provided by a closed-loop speed control system to supply the electrical loads with the standard frequency. While using more than one backup source, synchronization conditions must be considered such as the same voltage, frequency, phase sequence, and phase shift and only after checking this the power transferring is done through ATS.

What are the types of ATS transition

Open transition is also called a break before make transfer switch, a break before make contact switch breaks contact with one source of power before it makes contact with the other. It will prevent the back feeding from an emergency generator back into the utility line. Back feeding occurs when electric power is being induced in the power grid. Power flows in the opposite direction.

Delayed transition switch is used in which large inductive loads result in large inrush currents, delayed transition allows the magnetic field to collapse completely before reconnection. There will be a time delay between the opening of the closed contacts and the closing of the open contacts and this will allow large motor loads to demagnetize before transfer. This will prevent the severe bump which is caused by switching a rotating motor from one source to another source which is not in synchronism.

What are the applications of ATS