What does torque mean and is torque a force

Torque sensors can be used to measure the torque in a rotation system, in industrial automation torque sensors are used. Torque is classified as dynamic and static torque, static torque can be measured quickly but the dynamic torque measurement won’t be that easy. There is a mechanical stop function for torque sensors, which would improve the overload capacity and also gives protection during the operation and installation.

What is a reaction torque sensor 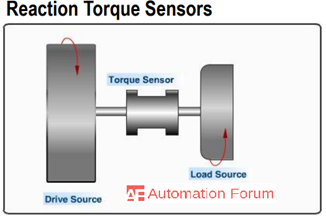 What are the types of torque sensors

How does rotary torque transducer work

Mostly rotary sensors are mounted on the shaft, but it’s not always done because of space limitation. The strain gauge can be directly installed in the shaft. Because the shaft is rotating, the torque sensor can be connected to its power source and signal conditioning electronics with the help of a slip ring. This industrial rotary torque transformer is used to measure the response of rotating torque. These sensors have proper mechanical stops, these torque meter would increase the safety during the assembly and operation. The applications of rotary torque sensors are mostly in the automotive sector like clutch testing, Efficiency testing, engine dynamometer. It can also be used for motor and pump testing.

The ability of the shaft material to concentrate magnetic flux, magnetic permeability also varies with torque and it can be measured using a magnetostrictive sensor. When the shaft has no loading then the permeability is uniform. Permeability and the number of flux lines increase according to the torque, under torsion. This type of sensors can be mounted to the side of the shaft by using two primary and two secondary windings.

Proximity sensors can also detect torque by measuring the angular displacement between a shaft’s two ends. The angular displacement caused by the torque can be measured, by installing two identical toothed wheels to the shaft. Proximity sensors or photocells located at each toothed wheel produce output voltages whose phase difference increases as the torque twists the shaft.

What are the applications of torque sensor