What is a proportional valve and how does it work 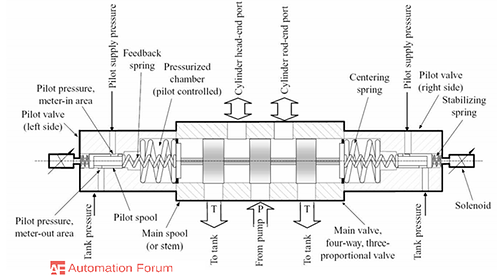 What are the features of a proportional solenoid valve

These valves have a closed-loop control system, so the valves are controlled by the help of electrical inputs from the sensor. Because of this feature, the proportional solenoid valves are used for many applications. These valves also have certain safety features like, in case of power failure or if the electrical input is interrupted then the valve will close immediately. Proportional solenoid valves have a long life and it only needs less maintenance. The solenoid operator has only one moving part

How proportional valves are constructed

In a proportional valve, the spool is made up of hardened steel and the body is made up of high-grade hydraulic casting and it is painted. The solenoids are zinc coated and the housing for the electronic is made up of aluminum. The proportional spool slide in the cast body. Their construction is robust similar to the directional control valves. These valves have high flow capacity and they are economical too. The throttle area is formed by notches cut into the spool. The notch size and geometry determine the flow capacity of a given housing.

The proportional flow control valve can be considered as the combination of the hydraulic valve actuation with advanced electronic control. The hydraulic circuitry is reduced by using a proportional valve, when a proportional valve is used it will reduce the number of components in a system. The accuracy and efficiency of the system will increase by using a proportional valve. A proportional directional control valve would vary the fluid flow according to the input electrical signal. These valves produce output proportionally to the electronically controlled input. The output will be in three forms they are direction, pressure, and flow. The coils in the valves mostly operate in DC and it could be by varying voltages. This would create a varying force and this force is used to shift the spool. These valves have high efficiency and accuracy and remote activation is another advantage of this valve. These valves are capable to control cylinders or other hydraulic motors. 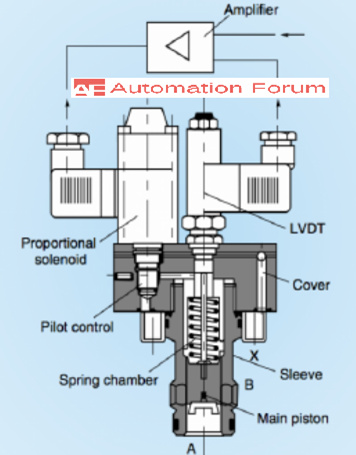 The operation of the valve takes place by a signal that is received from an outside device the device could be a PLC, computer, or potentiometer. The control device will give the electrical signals to the valve driver card and it would send a current signal to the valve solenoid. The spool will be shifted because of the force that acts on it and a flow path is created between the pump and the actuator port. According to the input in-put signal, the spool shifting takes place. A transducer is used to check the spool movement.

How to select a proportional control valve

What is a hydraulic proportional valve

Proportional valves are used in hydraulic systems because these valves are capable to position the spool many times according to the received input. These valves are used in circuits that need more than one speed of actuators. Proportional valves can be used in the hydraulic system so that it can control the pressure, flow, and direction. By using this valve the efficiency of the system will increase. So by using this single valve, we can control the flow, pressure, and direction, and this would also simply the circuit.

What are the types of proportional valves

An integrated compressor or hydrostatic is used to limit the pressure across the throttling orifice. So when the load force change there won’t be any change in the flow.

These valves can limit the pressure in a hydraulic circuit and this limit is adjusted by electronic control. There would be excess flow during the pressure-relieving process and this excess flow is sent to the reservoir tank

What are the applications of proportional control valve