What is a Photo transistor ? Operation and Application

A transistor is a semiconducting device Made of 2 junctions forming base, emitter and collector. A phototransistor is similar to a transistor in construction, except that the base does not have an external contact. 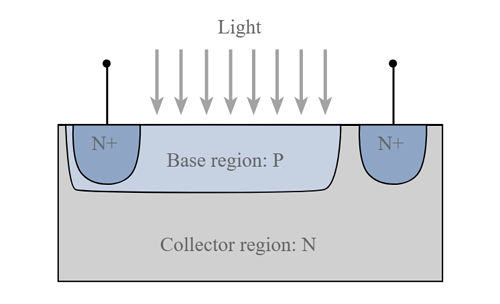 Principle of working of a phototransistor.

Light falling on the base region of the transistor converts the light into current flowing between the collector and emitter regions.

Symbol of a phototransistor.

Similar to a normal transistor with 2 arrows indicating the light incident on the base of the transistor. 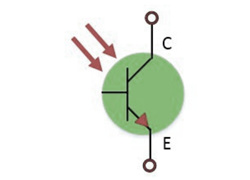 Operation of a phototransistor.

When light strikes on a material in this case semiconductor, It can make the real free electrons or holes in the material causing the current to flow in the region. Light at the base, region of the phototransistor generates electron whole pares. A phototransistor works in reverse bias condition i.e N layer is connected to the positive terminal of the supply and P layer to negative terminal,in the case of NPN transistor with both collector and emitter as a N region, collector terminal should be positive for the transistor to be reverse biased. The emitter Base Junction is kept at forward bias and Collector Base Junction is at reverse bias. Due to the influence of Electric field, electron movement causes current in the base region Which is injected into the emitter region.

Germanium and Silicon are used for the fabrication of Phototransistor. Lens is placed on the surface of the collector base junction For focusing the light onto the surface. Besides germanium and Silicon gallium and arsenide are used. Without any light. A small reverse saturation Current Is induced in the transistor Due to the minority carriers. But when light falls on the collector – Base junction majority carrier generation is increased and the current Adds. to the reverse saturation current.

Difference between photodiode and phototransistor.

Selection criteria for phototransistor based detectors

Effect of the size

What is a photomultiplier tube and how does it work