What is a lux meter and how does it work

What is a Lux meter

A lux meter is also called a light meter, it is a device which is used to measure the brightness. The lux meter measures the brightness specifically with the intensity by which the brightness appears to the human eye. This measurement method is different from the measurement of actual light energy produced by or reflected from an object or light source. Lux is a unit of measurement of brightness or illuminance. It derived from the candela, the standard unit for the measurement for the power of the light. This meter measures the illumination intensity as it appears to the human eye, and it does not correlate to an objective value of energy radiated or reflected. The visible spectrum has different wavelength and they appear to the human eye with varying sensitivity and the lux meter will measure the light intensity by considering this. 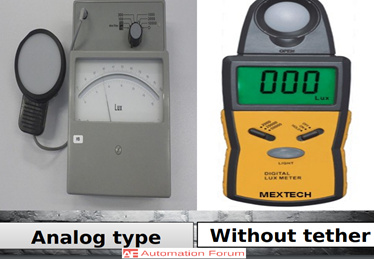 What is the difference between lumens and lux

The lux is the unit of illuminance in the international system of units and it is defined in terms of lumen per meter square. Candela is the standard unit of measurement for the power of light while the candela is the unit of energy, it has an equivalent unit known as the lumen, which measures the light the same as the perception of the human eye. One lumen is equal to the light produced in one direction from a light source rated at one candela. The lux takes it to account the surface area over which the light is spread, which affects how bright it appears.

What is a lux meter used for

How does lux meter work

Lux meter register brightness with an integrated photodetector. The photodetector is placed perpendicular to the light source for optimal exposure. Readouts are shown either by an analog instrument or digital LCD. Digital types include basic operator inputs. Digital types of meter can save measurements and they have an adjustable detection range. Photodetectors will be composed of selenium or silicon and it determines the brightness photovoltaically. Then the captured light is converted to electrical current and the lux value is calculated by measuring this current.

What are the specifications and features of lux meter

Cosine function – the light which enters the photodetector could be refracted and it can cause measurement error and this can be corrected by some photodetectors.

Operating temperature – it is the maximum ambient temperature that the photodetector could operate effectively. Photodetectors can be damaged above 1200 F

Range – it is the dynamic detection range of the light meter, which will be expressed in lux or foot-candles.

Filters – this option allows the user to remove certain wavelengths, such as backlight which would affect the measuring

Outdoor – the meter is suitable for outdoor applications, which will have the greatest difference in light intensity

How to choose a lux meter

How to take a reading in a lux meter

To take the light reading to expose the light meter sensor to the place which is to be measured and the sensor will be attached to the device by cable. It would look like a white bulb, check the reading which is displayed on the display and the reading is done.

What are the applications of lux meter

Lux meters are used in the defense establishment, it is also used in electricity board, lux meters can be used to measure, street and security lighting, office and factory lighting, daylight and sunlight. An important use of lux meter is in the workplace it can be used to check whether a room is bright enough to protect workers from suffering damage to their eyesight. It is also used to adjust the lighting systems of artificial lighting on railways. It is also useful for photography and video filming.