What is a flyback converter

Flyback is the simplest and most implemented SMPS topology, they are mostly used in low power applications. Fly backs are mostly used when the output needs to be isolated from the input. They can provide multiple isolated output voltages efficiency of energy is lower than other SMPS circuits. They have a controllable switch with an operating frequency of around 100 kHz. They have many features like low system cost, simplicity and relative ease of implementation. The circuit topology of the converter is simpler than other SMPS circuits. Input to the circuit is mostly unregulated DC voltage which is obtained by rectifying the utility AC voltage followed by a simpler capacitor filter.

Why use a flyback converter

The flyback design is very simple and it is of low cost while comparing to other SMPS’s. They can operate over a wide range of input-output variations. They have low parts count and is affordable for low power applications, which needs input and output isolation. When compared to other SMPS’s flyback converter is inferior, but because of its simple topology and low cost makes it popular in the low output power range. Flyback converters are one of the popular topologies which are used in isolated DC-DC power converters. Designers select flyback converter because of their simplicity and it can handle multiple isolated outputs, and the duty cycle can be improved by selecting the transformer turns ratio.

How flyback converter is different from a forward converter

In a forward converter, the choke carries both currents both when the transistor is conducting as well as it is not. While the transistor is off, the diode will carry the current. So energy will flow to the load during both the periods. During the ON period the choke stores energy, it also sends some energy to the output load. While in the case of a flyback converter, the energy is stored entirely in the magnetic field of the inductor during the ON period of the switch. The energy is emptied into the output voltage circuit when the switch is in the open state the output voltage is dependent upon the duty cycle.

How does a flyback converter operates

Flyback topology is the buck-boost topology which is isolated by a transformer as the storage inductor. The transformer provides isolation and it can also be used to adjust the output voltage. The operation of the flyback converter can be divided into two steps in the first one the switch is turned on and the energy is stored on the primary winding of the flyback transformer. On the secondary side, the diode is reverse biased and the load is supplied through energy stored in the output capacitor. In the second step, the switch is turned off and the energy stored in the primary winding is transferred to secondary. The diode is forward biased and the energy is delivered to charge the output capacitor as well as supply to the load. 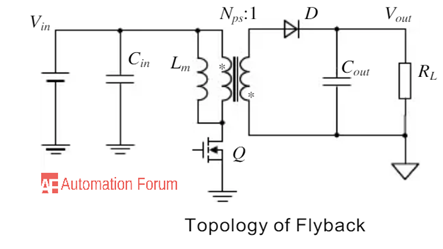 What is a self-operating flyback converter

This kind of flyback converter can be considered as the most simple and basic converter based on the flyback principle. A switching transistor, a converter transformer, a fast recovery rectifier, and an output filter capacitor makes a complete DC-DC converter, it is a constant output power converter.

What are the advantages of interleaved flyback converter

What are the disadvantages of interleaved flyback converter

What are the applications of a flyback converter

Isolated flyback converters are majorly used for small power supplies, such as battery chargers for portable devices and for auxiliary power supplies in electronic equipment.