What is a cooling tower? 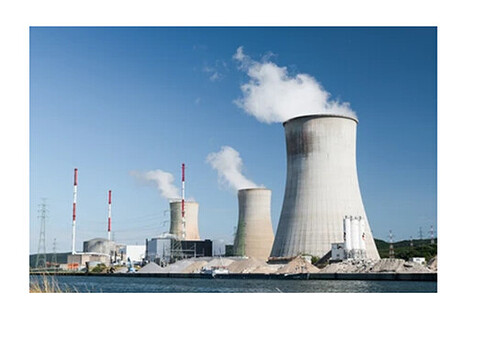 Cooling towers are referred to as one of the most important parts of every industrial plant. The primary role of a cooling tower is to dispose of heat into the atmosphere and makes the system cool. So, it is considered a rejection device.

How does the cooling tower work?

Evaporative cooling is a natural cooling process that involves evaporating water into the air. A good example of this is the sudden sensation of becoming cold when we step out of a hot shower or the use of misting fans to keep football players cool on the sidelines. Our skin is wet and not easily exposed to air while we are in the shower, but when we step out into the air, the water on our skin begins to evaporate and pulls heat out of our bodies, causing us to feel cool. Cooling towers use the same evaporative cooling principle to cool a continuous flow of water.

There are different types of cooling towers are available in the market however, every cooling is based on the principle of evaporative cooling.

What is evaporative cooling? It is also known as adiabatic cooling. It is working based upon the evaporation of water through which the temperature of the air is reduced to a safe temperature. Water evaporates in an air stream and converts from a liquid to gas during the evaporative cooling process. This transition necessitates the extraction of energy from the air in the form of heat. The air is cooled as a result of this process.

Components of cooling towers are 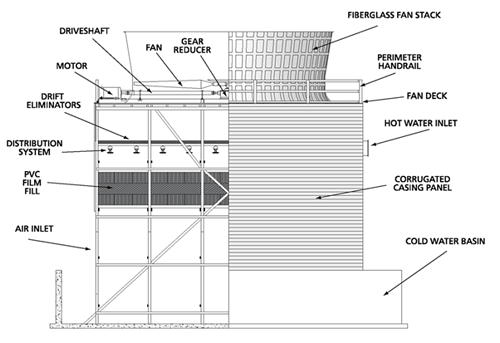 Cooling Tower Louvers The air intake louver is a component of the cooling tower that acts as a barrier against water splash-out, noise, and particles. They also keep sunlight from entering the cooling tower.

There are two types of fills.

Fans are used in cooling towers of various types, including counterflow, crossflow, and mechanical draught. These fans’ primary function is to push and force air into the cooling tower.

The majority of cooling tower fans are loud. There are, however, quieter fans available. It is also possible to look for fans that are long-lasting and can withstand the device’s complexity.

Drift eliminators are used to capture the large droplets of water from the cooler’s air stream. The water droplets may have various chemicals and minerals that affect the cooling tower and other machines.

The cooling tower gearboxes also act as a torque multiplier, keeping the motor at a reasonable size. They also reduce the cost of the mechanical system. Without these gearboxes, the large and heavy motor would handle the fan’s required torque. And this would be prohibitively expensive.

The cooling tower basin may be of different types namely the collection basin and the distribution basin.

The collection basin is located below or at the bottom of the cooling tower. It aims to collect water and direct it to the sump or pump suction line.

Meanwhile, the distribution basin is a shallow-type elevated basin. It distributes hot water to the tower through orifices in the basin floor.

There is also the so-called cold-water basin that could remove stagnant water and lessen the growth of any bacteria. Its suction strainer could be easily removed and making the basin of little maintenance. There is also a cold-water basin, which can remove stagnant water and slow the growth of bacteria. Its suction strainer was easily removable, making the basin low-maintenance.

The cooling tower piping chief function is to distribute water in the cooling tower. The magnitude and routing of the water piping between the heat source and the location of the tower depending on the kind of tower, site layout, and topography. The typical supply piping layout is that the supply line is located adjacent to the long side of the tower.

Meanwhile, vertical riser pipes are provided and connected to the supply line to the inlet connection at the elevation of the tower’s distribution system.

The cooling tower motor is designed to power the fans on a cooling tower that uses mechanical draught. To withstand the harsh environment in the tower, the motors must be efficient and long-lasting.

The Open and Totally Enclosed Cooling Tower Motors are the two types of cooling tower motors.

For cooling, the open motor generates external air in the enclosure. In the meantime, the Totally Enclosed motor prevents outside air from entering the enclosure.