What is a contactor and why is it used

What is a contactor and why is it used

A contractor can be considered as a power control device, contactors can be seen in electrical equipment which is frequently turned off and on such as lights, and motors. Contactors can be seen in a small light switch to complex automated industrial equipment. Contactors are used to make and break all power supply lines running to the load, or it can also be described as to create an interrupt the electrical power circuit. The contractor acts as a relay that can enable the heavy load to be switched off and on with small operating current. A contactor is an electromechanical switching device and it is operated remotely and they are capable of making carrying and breaking currents under normal conditions and during operating overload currents. It is placed nearest to the load centers it has high service reliability in terms of mechanical and electrical. 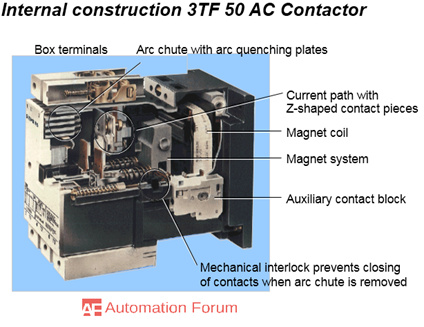 contactors are similar to a relay except that the contactors have higher current ratings. The contactor is not intended to interrupt short circuit current. A contactor ranges from those having a breaking current of several amperes to thousands of amperes and the size of the contactor ranges from a device that is small enough to pick up with one hand and to a large device which is almost a meter on a side. Contactors can be used to control the motor and other electrical loads

What are the features of a contactor

What are the components of a contactor

Contacts are the current-carrying part of the contactor and it includes auxiliary contacts, power contacts, and contact springs. The driving force to close the contact is provided by the electromagnet (or coil). An auxiliary contact reduces coil current after contactor closes, a large amount of current is needed to close the contactor initially than it’s required to keep its closed and such circuits can save a great amount of power. The contractor will have a coil input which may be AC or DC depending on the contactor design and the coil could be energized at the same voltage as a motor. The contactor may be controlled with a lower coil voltage.

What is the difference between a relay and a contactor

Contactors are designed to be directly connected to high current load device but the relays are used for the lower capacity and they are normally used for normally closed and normally open applications. contactors have higher current ratings than a relay, contactors are used in devices switching more than 15 amperes or in circuits which are rated more than few kilowatts. Contactors have features to control and suppress arc produced when interrupting heavy motor currents and relays don’t have these features.

How does a contactor work 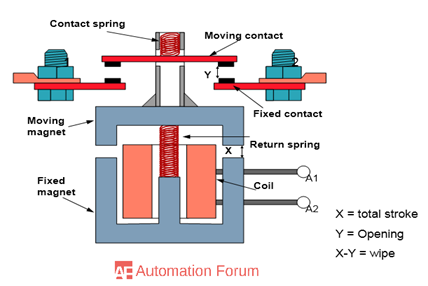 When the coil energizes the E-frame, it becomes an electromagnet. The armature which is placed near to the E-frame is connected to the asset of contacts. When the coil is energized the movable contacts are pulled towards the stationary contacts because the armature is pulled towards the E-frame, when the two sets of contacts meet power will flow through the contactor to the load. So when the coil is de-energized the magnetic field is broken and the spring will separate the two contacts. Contactors are used when no overload protection is necessary and at lower levels of electric current. It can also be operated electromechanically and uses a small control current to open and close the circuit.

What are the problems that can be caused in a contactor

Contactors problems can be caused by

If we don’t use proper contact protection then the degradation of contact will happen due to the occurrence of the electrical current arc. This could cause severe damage electric arc occurs between the two contact points and the heat which is developed by the electric arc can cause the metal on the contact to migrate with current

How can we do the maintenance of a contactor

What are the types of the contactor

What are the applications of contactor