What is a Boiler and How does it work?

What is a Boiler?

A boiler is an enclosed vessel that heats a fluid, such as water, to produce steam or the vaporized form of a liquid. After that, the steam or hot water is circulated through a piping system to transfer heat for various applications such as heating, power generation, and other processes. Boilers and associated systems are efficient heat exchange systems; however, if not properly maintained and operated, they can be dangerous.

How does the boiler work?

The boiler is considered the heart of a central heating system. It circulates hot water through your radiators and faucets to provide you with both heating and hot water.

Gas boilers can be connected to the gas mains and receive a continuous supply of fuel, or they can be equipped with Liquid Petroleum Gas (LPG) cylinders that must be refilled on a regular basis. During operation, a valve connected to your boiler opens, allowing gas to enter a sealed combustion chamber. An electric ignition system or a permanent pilot ignites the fuel, which is then burned.

Hot jets connected to a heat exchanger within the boiler transfer heat to the water passing through the exchanger. The hot water is then pushed through your radiators and taps by an electric pump.

1. According to the water and hot gasses position

It is the oldest boiler and it was very famous in the 18th century. It is mainly used in train engines. Can find this type of boiler measurement by using their external diameter. The combustion of heat and gases flows through a pipe enclosed by water in this type of boiler.

2. According to Axis of Shell

A vertical boiler is a type of fire-tube or water-tube boiler in which the boiler barrel is oriented vertically rather than horizontally. Vertical boilers were used in a wide range of steam-powered vehicles and mobile machines, including early steam locomotives. 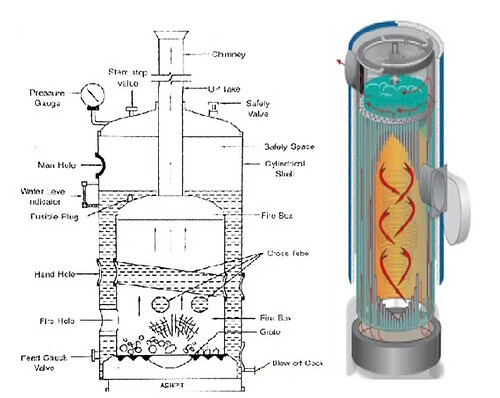 3. According to the boiler’s position

In externally fired boilers, the fuel is burned in a chamber outside the boiler shell.

The combustion chamber is provided inside the shell of internally fired boilers.

4. According to the pressure

Low-pressure boilers typically maintain pressures of 10 to 15 psi and temperatures of less than 300 degrees Fahrenheit. This type of boiler is typically used in buildings where a relatively consistent temperature is required for all spaces and no rapid temperature changes are required. 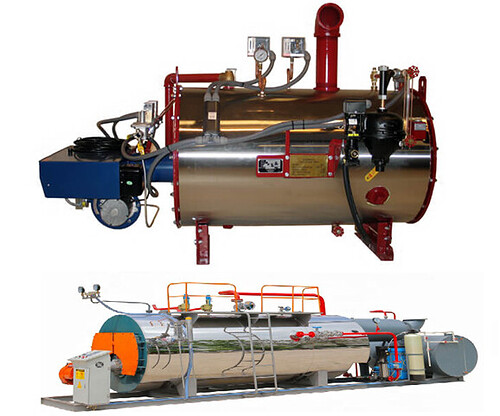 These are used to boost the plant’s efficiency. These have arisen as a result of rising fuel costs and air pollution regulations. High-pressure boilers are commonly used in modern power plants. These high-pressure boilers have pressures greater than 140 bar and temperatures ranging from 540 to 610°C.

5. According to the method of circulation

6. According to use of boilers

Mobile boiler rooms are trailer-mounted, highway-legal vans or containers designed and customized to house the components of a “mini” steam plant.

These are stationary boilers that cannot be moved from one location to another. They cannot be transported to another location once they have been installed. It is mainly used in power plants and other industries

Single drum boilers are primarily used to generate electricity. With the advent of supercritical pressure boilers, even the single drum is being phased out. This type of boiler has the advantage of being able to be designed for extremely high pressures, flows, and temperatures.

It is a type of water-tube boiler that generates steam, which is typically used to power ships. They are compact and have a high evaporative power, both of which encourage their use.

8. According to the nature of drought

A blower is installed near the base of the boiler, and the air is forced to pass through the furnace, flues, economizer, air preheater, and stack in a forced draught system.

9. According to fuel firing

A “Solid Fuel-Burning Appliance” is a chimney-connected device that burns solid fuel for the purpose of heating. These Solid Fuel Fired Steam Boilers run on wood, coal, agro waste, and briquettes as fuel.

In comparison to other heating systems, a liquid fuel boiler ensures high efficiency. This boiler employs a liquid-fired burner to heat water or generates steam before it is routed to the property’s radiators.

Natural gas furnace provides very high efficiency than other boilers. The natural gas fuel boilers use various natural gases like petrol, diesel, LPG, etc to heat water to produce steam before it is routed to the radiator of the machine.

Components of a Boiler Systems

Burner:- The boiler’s burner is the component that provides the heat that heats the system’s water. The fuel can be either oil or another natural gas.

Return lines:- When the water cools or the steam cools and changes states back to the water, the return lines return it to the boiler for re-heating.

Firebox:- It is where the fuel and air meet and make a flame.

Refractory:- The return lines bring this water back to the boiler for re-heating when the water cools or the steam cools and changes states back to the water.

Deaerators/Condenser:- Deaerator and condenser tanks are only used in steam boiler systems, not in hot water or hot oil boiler systems because the fluid is always in liquid form. These two types of tanks are nearly identical in construction, but as their names suggest, they are used for different purposes.

Economizer:- Economizers was previously only used in large-scale power plants. However, due to the increased demand for more efficient boilers in industry and marine, economizers are becoming more common. An economizer is a heat exchanger that is installed in the exhaust of a boiler. Pump specifications vary greatly depending on where the economizer is installed.

Superheater:-:- It is a boiler component that is placed in the path of hot flue gases from the furnace. The recovered heat from the flue gases is used to superheat the steam before it enters the turbine (i.e., prime mover). Its primary function is to raise the temperature of saturated steam without increasing its pressure.