What is a balun and why do we need a balun

What is a balun

Why do we need a balun

The main reason to use a balun is to reduce the feedline radiation. Feedline radiation can distort the radiation part of the antenna-the direction we want the RF to travel. This can produce nulls in the pattern directions that nothing can be transmitted or received. With the help of baluns, balanced loads can be fed through unbalanced transmission lines. Baluns are capable to provide better connection of a parallel line to a transceiver. Baluns can prevent unwanted RF currents from flowing in the ‘third’ conductor of a coaxial cable. 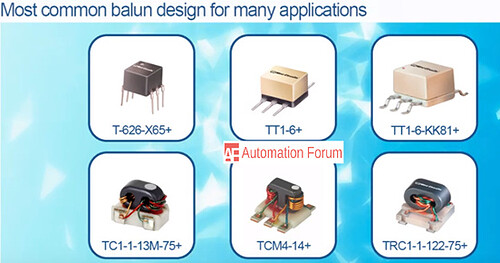 What is a balanced transmission line

What is a balanced circuit

A balanced circuit is not defined according to the equality of the current or voltage on two conductors. It is defined as the circuit in which the impedances of the two conductors to the reference plane are equal in both magnitude and phase. A balanced circuit acts as a wheat-stone bridge, rejecting noise by virtue of the balance of the impedances within that system.

Why is a balun used in an antenna

What are the types of baluns

Baluns are classified into two types, and both of them are different from each other. Each of them is different electrically.

A current balun is balanced with respect to ground, its output currents are equal and opposite. The exception of the 1:1 current balun, current baluns are more expensive to construct than the voltage baluns so they are not widely used as a voltage balun. Current baluns could be made with RF transformers on ferrite cores or with lengths of the transmission line. The common-mode field can be seen by current balun. When wound with coax, this is true because all of the magnetic field associated with common mode current is outside the line, inside the coax all of the field requires for the transmission of power from the transmitter to the antenna is present. The current baluns work by adding a high impedance in series with the common-mode impedance of the line, thus reducing the common-mode current to a small value. Current baluns are classified into three types they are solenoid balun, inductive ferrite choke balun, and lossy ferrite choke balun.

What are the advantages of baluns

What are the disadvantages of baluns

A small amount of inductance or impedance is introduced in the antenna system. High SWR will destroy the poorly constructed baluns, even at low power levels. Cores will absorb the energy and saturate easily, and this may mask an antenna problem, with the core being matched as the load.