What cause losses in the transformer and how to reduce it ? How to achieve maximum efficiency of a transformer

What causes losses in the transformer and how to reduce it

Mostly transformer energy loss is caused by winding and core losses. Transformer losses vary with loads, in order to design an energy-efficient transformer with a lower loss would require a larger core, good-quality silicon steel, or even amorphous steel for the core and thicker wire.

Current flowing through a winding conductor causes joule heating. When the frequency increases the skin effect and proximity effect causes the winding resistance, and hence increase in loss.

Eddy current loss is due to the current flow within the core due to changing magnetic fields. The core has to be suitably designed to control them to the desired levels. In order to reduce the eddy current core can be made by stacking thin sheets together and this will reduce the eddy current. Eddy currents are formed in the metal transformer core and cause heating of the core. The eddy current loss is a complex function of the square of supply frequency and inverse square of material thickness. This loss can be reduced by making the core of a stack of plates electrically insulated from each other.

Stray loss can be considered as the combination of the core loss which is caused by the distortion of an air gap and the I2R loss which is by the non- uniform distribution of conductor current.

This type of loss is formed by the bearing friction, brush friction and windage loss and the windage loss includes the power required to circulate air through the machine.

Because of the ohmic resistance copper loss occurs in the primary and secondary windings and it can be checked by a short circuit test. This type of loss is depended upon the magnitude of the current which flows through the winding.

Transformer efficiency will increase with an increase in transformer capacity. Like most of the electrical machines, the efficiency of the transformer is defined as the ratio of the output power to the input power.

The power measured in the primary and secondary windings will be close but it won’t be equal. There will always be a small power loss, which means that not all the energy is transferred from the primary to the secondary winding. The loss of energy is a measure of the transformer’s efficiency. The transformer’s efficiency is the ratio of real output power to real input power. The power rating of the load is the real output power, and the sum of output power plus the transformer loss is the input power. 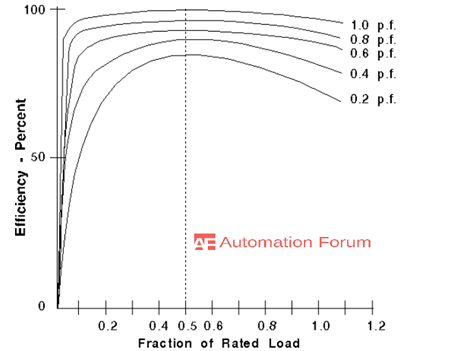