What are Water trap and Pigtail siphons?

Why trap and Siphons are needed?

Many industrial processes utilize high-pressure steam for direct heating, performing mechanical work, combustion control, and as a chemical reactant. Measuring the pressure of steam is important both for its end-point use and its generation (in a boiler). One problem with doing this is the relatively high temperature of steam at the pressures common in the industry, which can cause damage to the sensing element of a pressure instrument if directly connected.

So that to create a barrier techniques such as pigtails are used. 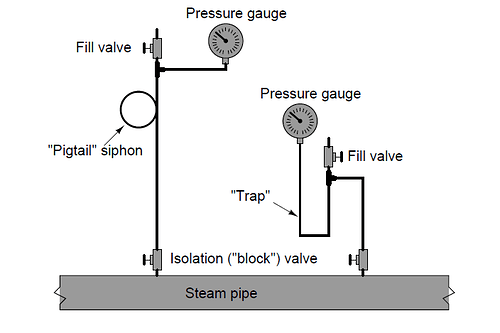 To avoid the direct contact of hot steam through the steam pipe a pigtail shaped curve is made at the impulse line to the pressure gauge. where condensed steam (water) will accumulate and act as a liquid barrier to prevent hot steam from reaching the pressure instrument.

The same effect is created when we made a water trap in the line. Water trap is a low spot in the impulse line.

When siphons are installed, it should be filled with water or any other suitable separating liquid.