What are the usual problems of control valves?

What are the usual problems of control valves?

The problems of control valves usually manifest themselves as stiction, deadband and hysteresis. 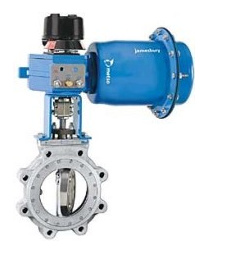 Dead band is also called neutral zone or dead zone. Deadband is a general phenomenon where a range or band of controller output values fails to produce a change in the measured process variable. This is bad for process control.

Process control systems these days execute at a rate of about 3 times per second. On top of that, each time it executes, the output changes in the magnitude of usually less than 1%. But most relevant in the case of deadband, the changes can occur in either direction.

The controller then tries to go back the other direction only to be faced with the same situation. And the process will be driven to overshoot in either directions and cycles continuously forming what is called a limit cycle. 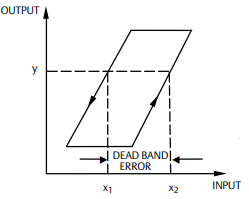 Hence deadband is a region of input values in the domain of a transfer function in a control system or signal processing system where the output is dead or no action has occurred.

The word stiction is made from the words stick and friction. This is somewhat similar to deadband except that it does not only happen when the controller changes direction. Again stiction (also known as ‘sticky valve’) can be due to a variety of reasons, a common one which is packing friction.

As far as process control is concerned, the effect of stiction is also like deadband whereby the valve fails to respond when required and when it does respond, overshoots the setpoint. The controller then tries to bring it back the other way.

Stiction is caused when the static (starting) friction exceeds the dynamic (moving) friction inside the valve. Stiction describes the valve’s stem (or shaft) sticking when small changes are attempted. Friction of a moving object is less than when it is stationary.

Stiction can keep the stem from moving for small control input changes, and then the stem moves when the force is enough to free it. The result of stiction is that the force required to get the stem to move is more than is required to go to the desired stem position. In presence of stiction, the movement is jumpy. 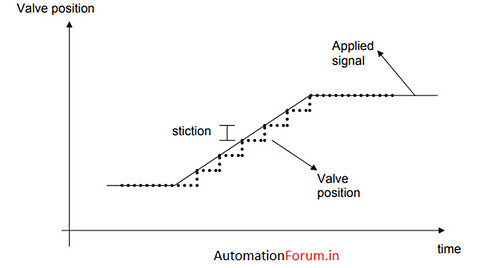 This results in different process gains in both directions and will confuse the controller, which has been tuned for only one process gain. We have to remember that industrial controllers are linear. The following figure illustrates a case of valve hysteresis.

Hysteresis is a path dependent characteristic that can be attributed to materials not being able to return to their original shape and size after being stretched or deformed. Dead band represents the amount of signal change required to reverse direction and is characterized by a zero slope region where the input signal reverses. 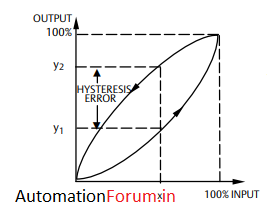 I hope this can add to the topic