What are the different types of vibration measurement instruments?

A transducer is a device for converting the mechanical motion of vibration into an electrical signal,commonly called pickup.

There are three kinds of transducers- Displacement,Velocity,Acceleration

The most common type of displacement transducer is proximity probe.

Operates on the eddy current principle.

It sets up a high-frequency electric field in the gap between the end of the probe and the metal surface that is moving.

Senses the change in the gap. 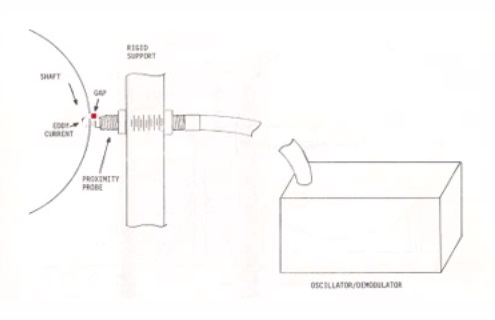 Sensitive to shaft surface defects such as scratches,dents and vibrations in conductivity and permeability.

Senses shaft runout,and it is very difficult to distinguish vibration from runout.

The practical maximum frequency of proximity probes is about 1500 Hz.The minimum frequency is zero.It can also measure static displacement.

A useful application of proximity probes is to measure very slow relative movement like thermal expansion.

It is useful in situations where the vibrating part cannot tolerate the mass of the pickup.

The relative motion between the permanent magnet and the coil generates a voltage that is proportional to the velocity of the motion.

The velocity transducer has an internal natural frequency of about 8 hz.

The velocity transducer is rather large.On small devices this added mass can significantly affect the vibration output.

The coil in the velocity pickup is sensitive to external electromagnetic fields. 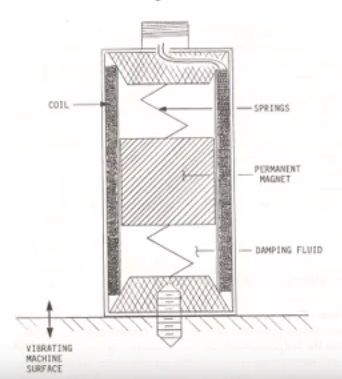 The most common acceleration transducer is the piezoelectric accelerometer

It consist of quartz crystal with a mass bolted on top and a spring compressing the quartz.

A property of piezoelectric material is that it generates an electrical charge output when it is compressed. 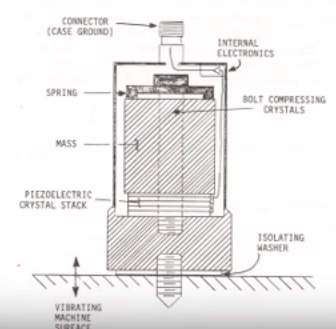 Typically accelerometer has very high natural frequency,typically 25000 Hz.Its response is linear for about 1/3 of this range.

It has a useful frequency range of from about 5 to approximately 100000 Hz depending on its size.

The primary considerations in selecting an acceleromter are sensitivity and frequency response.

If high-amplitude motions are to be measured,i.e. greater than 10g,such as in shock measurement,then a low-sensitivity accelerometer is appropriate 10 mV/g or less.

If the level motion is to to be measured,such as building or structural motions at low frequencies then a high sensitivity accelerometer should be chosen 1000 mv/g.

For most machinery monitoring,100 mV/g sensitivity accelerometer provide the right balance of sensitivity and frequency response

Other considerations in accelerometer selection or transducer are

Transverse Sensitivity is the ability of the transducer to detect motion in directions perpendicular to its sensitive axis.

Damping is very low in piezoelectric accelerometer but can be significant in other types,such as piezoresistive accelerometer

Strain sensitivity is the ability of the transducer to generate a signal when the base is distorted,such as when it is clamped against a nonflat surface.