Steam traps are a type of automatic valve that filter out condensate and non-condensate gases such as air without steam escape. This self-contained valve automatically drains the condensate from a steam-containing enclosure while remaining tight to live stream.

There are different types of Traps: 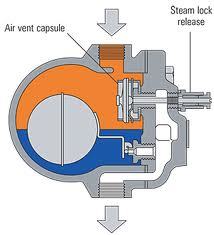 A simple stem trap is shown above, which is a mechanical ball type steam trap. This type of trap consist of a float system.