Pyrometry measures the temperature of objects without touching them. Each object whose temperature is above absolute zero (-273.15 ° C) emits radiation. This emission is heat radiation and depends on the temperature. The term infrared radiation is also used because the wavelengths of most of this radiation are in the electromagnetic spectrum over visible red light, in the infrared domain.

Temperature is the determining factor of radiation and energy.

The output is used to infer the object’s temperature. Thus, there is no need for direct contact between the pyrometer and the object, as there is with thermocouple and Resistance Temperature Detector (RTD). 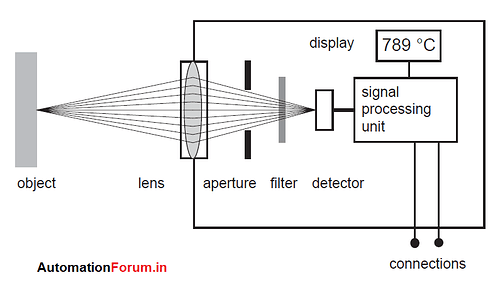 The basic parts of a pyrometer are the lens, aperture, filter detector, and the signal processing unit. The infrared radiation coming in from the object to be measured is gathered by the lens. The aperture blocks unwanted rays at the edges.

The filter permits only the desired spectral range to enter. The rays then pass through to the detector which transforms the infrared radiation into electric signals. These signals are then linearised in the signal processing unit and changed into a standard output signal which can then be read in the display, and be used for process control.

Based on the principle of operation, IR detectors fall into one of two categories:

The thermopile is made by connecting several thermocouples in series and placing their hot junctions in contact with a black body that absorbs the incident infrared energy and heats the hot junctions.

The cold junctions are placed in the detector area with a suitable heat sink. These detectors have fast response, broadband, wide dynamic range and are frequently used in general purpose, automotive, air conditioning and human body thermometers.

Bolometers use a slab of material that changes its resistance in response to a change in temperature. The circuit converts the resistance change into a voltage change, which is processed by the instrument. Bolometers are often used to measure low-level IR energy, often as an accessory to a telescope.

Pyroelectric devices are electrically charged when the temperature of your body changes. To produce a usable signal, the incident IR energy has to “pulse”.

The photodetectors are built on a silicon substrate with an IR-sensitive area that releases free electrons when they are impacted by photons. The flow of electrons produces electrical signals proportional to the incident energy. These detectors are often used as matrices in thermal imaging systems. 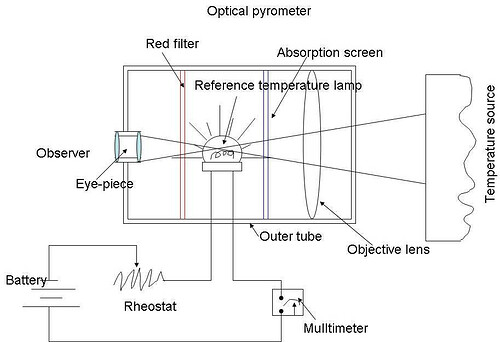 Optical pyrometers work on the basic principle of using the human eye to match the brightness of the hot object to the brightness of a calibrated lamp filament inside the instrument. The optical system contains a filter that restricts the wavelength-sensitivity of the device to a narrow wavelength band around 0.65 to 0.66 microns.

Also read: How to Choose the Right Temperature Sensors for Your Measurement System?