What are losses in Electrical Power Systems?

Due to the various issues or unwanted effects such as heating of components, parasitic elements effects, skin effects, transformer core, etc, there will be power lost in electrical, electronic, or in power systems. There will be power loss that occurs while transmission of electric power through lines.

Apart from the above-mentioned issues, sometimes there is a chance of non-technical loss that affects the revenue and profits of the company. Non-technical losses include electricity used not being paid for, theft, tampering of meter, false meter readings, etc. Technical and human errors in meter readings, data processing, and billing can occur, resulting in over-or under-charging.

Losses are classified into two types. They are 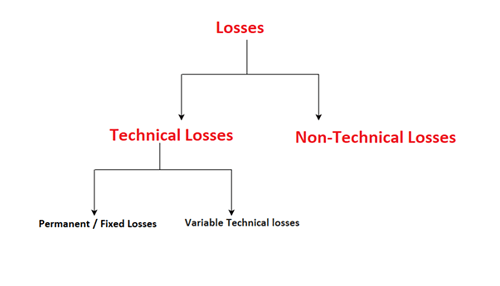 Technical loss occurs due to the energy scatter in the elements used in the equipment such as conductors, resistors, etc, materials used in transmission lines, transformers, distribution lines, and magnetic losses in transformers. Due to the technical loss, around 22.5% loss occurs and it directly depends on the characteristics of networks and operation modes.

In the power systems, major losses occur in primary and secondary distribution lines. Approximately 30% of total loss is carried out while transmission and sub-transmission lines. As a result, the primary and secondary distribution systems must be properly planned to ensure that they remain within limits. The unexpected increase in load resulted in an increase in technical losses above the normal level. Losses are unavoidable in electricity distribution and cannot be eliminated.

Technical losses are again classified into two types. They are

Fixed losses on a network can be influenced in the following ways:

Not like permanent loss, variable technical losses differ with the amount of current transmitted. Variable loss is directly proportional to the square of the current flowing. We can reduce the losses by adding the cross-sectional area of lines and cables for a given load. As a result, there is a direct trade-off between the cost of losses and the cost of capital expenditure. It has been proposed that the optimal average utilization rate on a distribution network designed to account for the cost of losses could be as low as 30%.

Variable losses on a power network can be influenced in the following ways:

What are the main reasons for Technical Losses?

The main reasons for technical losses are

Transformer away from load centers

The power factor in most LT distribution circuits lies between 0.65 to 0.75. A low power rate leads to high power loss. When the power factor is low, the current drawn in high and power losses is proportional to the square of the current will be more. So, we can reduce the losses by increasing the power factor. This can be done by using shunt capacitors at various points in transmission lines.

Poor workmanship or bad workmanship leads to high distribution loss. The number of joints increases the power loss, so the number of joins always should be kept to a minimum. Make sure the proper joining techniques were used while installing distribution lines. Various connections like connection to the transformer bushing item, fuse, isolator, LT switch, etc should be checked at regular intervals, and take necessary steps to avoid sparking and heating due to contacts.

Current (Load) balancing is considered one of the easiest and simplest ways to reduce power loss in three-phase circuits. Feeder phase balancing also tends to balance voltage drop between phases, resulting in less voltage unbalance for three-phase customers. The magnitude of the current at the substation does not guarantee that the load is balanced throughout the feeder length. Feeder phase unbalance can change throughout the day and with the seasons. Feeders are considered “balanced” when the magnitudes of the phase currents are within a factor of ten. Similarly, balancing load among distribution feeders will reduce losses if the conductor resistance is the same. This may necessitate the installation of additional switches between feeders to allow for proper load transfer.

The variation of the load is called load factor and it varies from 0 to 1.

Load Factor=Average load in a specified time period/peak load during that time period.

Energy losses and lower power can be reduced by increasing the load factor, which, evens out feeder demand variation throughout the feeder.

When a transformer is energized, it experiences no-load excitation loss (iron loss) due to a changing magnetic field in the core. Although core loss varies slightly with voltage, it is essentially constant. The fixed iron loss is determined by the transformer core design and the molecular structure of the steel lamination. Core losses have been reduced as a result of improved steel core manufacturing and the use of amorphous metals (such as metallic glass).

We can reduce the loss by balancing three-phase loads regularly throughout a network. It is relatively simple to implement on overhead networks, and thus offers significant potential for cost-effective loss reduction if appropriate incentives are provided.

Can reduce fixed loss by turning off transformer when the demand is low.

For ex: Assume there are two identical transformers are required at the sub-station during peak hours and only one is required when the demand is low, so the operator can turn off the one transformer to reduce fixed loss. This may lead to the origin of some offsetting and it may affect the security and service quality and the operational condition of the transformer too. However, unless the cost of losses is considered, these trade-offs will not be explored and optimized.

Other Reasons for Technical Losses

Power theft of energy delivered to consumers is not calculated by the energy meter. Customers bypass the energy meter by different methods like mechanical jerks, placement of a strong magnet near to meter, stopping the meter by using remotes, etc.

Unmetered losses occur when energy consumption is estimated rather than measured with an energy meter. This occurs when the loads are very small and the installation of an energy meter is economically impractical. Streetlights and cable television amplifiers are two examples of this.

Unmetered supply is one of the main problems faced by companies. Usually, companies sanction the power loads depending upon the instruments used in commercial places. Once the owner got the sanctions from the concerned authority, the consumers increase their connection load without informing the authorities.

What are the methods for reducing technical losses?

Actually, many low voltage lines in town are surrounded by feeders with high voltage. At lower voltages, more conductor current flows for the same amount of power delivered, resulting in higher I2R losses. Changing old LV lines to higher voltage costs high. However, installing multiple step-down transformers in the 430-volt area helps to reduce the copper loss by injecting load current at many points (That is, lowering the overall conductor current and the distance the current travels to serve the load.)

Install direct line from the feeder for large users

Arrange a dedicated transmission line network for large users that helps to give direct power from the feeder.

LT lines are unavoidable actually, so in those cases install ABC (Arial Bundle Conductor) to reduce the faults in the line that also prevents theft (tampering of line).

Utilize Feeder on its Average Capacity

Replacements of Old Conductor or Cables

The higher the cross-section area of the conductor/cable, the lower the losses, but at the same time cost will be high. As a result, by forecasting future load, an optimal balance between investment cost and network losses can be maintained.

What are the methods to reduce non-technical losses?

The methods to solve non-technical losses are

An energy audit scheme should make mandatory for all industries and take the necessary steps for a realistic assessment of T&D losses into technical as well as non-technical losses.

The realistic assessment of a utility’s T&D loss is greatly influenced by the sample size chosen, which in turn influences the level of confidence desired and the tolerance limit for variation in results. In light of this, it is critical to set a sample size limit for realistic quick estimates of losses.

The advanced meter should be installed to calculate the use of electrical energy and take the necessary steps to replace the faulty meters.

What is eddy’s current loss? 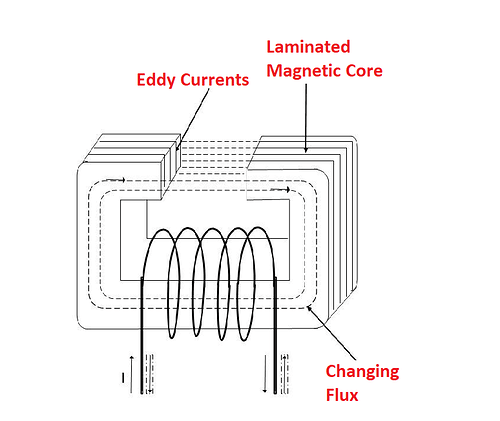 According to Faraday’s law of electromagnetic induction, an emf is induced in a material when an alternating magnetic field is applied to a material with the magnetic property.

The EMF’s current flow rotates all around the magnetic material’s body due to the magnetic property of the conducting material. This rotating current is known as Eddy Current. They will happen when the conductor is subjected to a changing magnetic field.

Because these currents aren’t doing any useful work, they cause a loss (I2R loss) in the magnetic material known as an Eddy Current Loss.

Eddy current loss occurs because of the relative motion between the core and the magnetic flux.

What is Hysteresis loss?