In most air and hydraulic fluid power circuits valves are used to control the direction, rate, and pressure in fluid lines. Control valves for these functions can be purchased with either manual or solenoid actuators . in a manually actuated valves, the internal cylinder is shifted by hand using a lever, push button, plunger or other manual actuating device. By contrast, valves with the solenoid actuators respond to an electrical signal for shifting. With Electrical control , machine cycles can be set up for automatic sequencing and operator control can be exercised from a remote location. 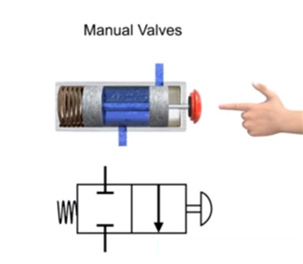 A solenoid valve is an electromechanical device in which the solenoid uses an electric current to generate a magnetic field and thereby operate a mechanism which regulates the opening of fluid flow in a valve. A Solenoid valve is used wherever fluid flow has to be controlled automatically. They are being used to an increasing degree in the most varied types of plants and equipment. The variety of different designs which are available enables a valve to be selected to specifically suit the application in question. 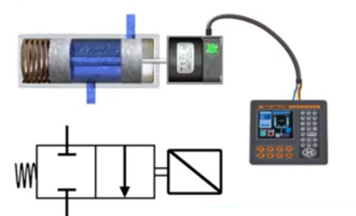 Most solenoid valves operate on a digital principle. They therefore possess two distinct states, which are

(1) - when the coil is activated by an electrical current, and

(2) - when the valve is resting (without electricity). Valve functions are defined from the resting position. The direct acting or pilot operated solenoid valves may have two functions:

A solenoid valve is normally closed (abbreviated - NC) if there is no flow across the valve in its resting position (with no current on the solenoid contacts).

A solenoid valve is said to be“normally open” (abbreviated NO) when it enables fluid to pass in its resting position (with no current on the solenoid contacts).

Solenoid valves are said to be either direct or pilot operated. Each type of solenoid valve has its own unique representation and usage which is detailed below 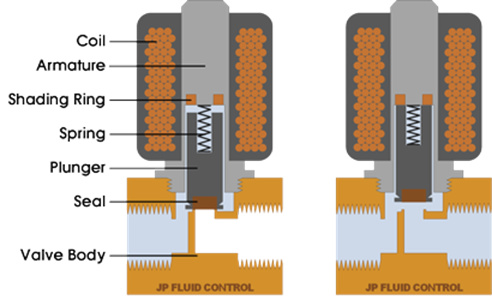 A plunger made of ferromagnetic Material with the rubber seal is pressed against the valve seat by a spring and also by the pressure of the medium. As soon as electric current flows through the coil a magnetic field is created, the plunger is magnetized and pulled towards the centre of the coil. This opens the orifice and the medium can flow through. as soon as the flow of electric current is stopped the magnetic field will disappear, which causes the valve to close. It.

An indirect operated solenoid valve which uses the pressure of the medium for the operation.

A Pilot operated valve has the pilot and bleed Orifice and utilizes line pressure for operation. This is a pilot operated relief valve. 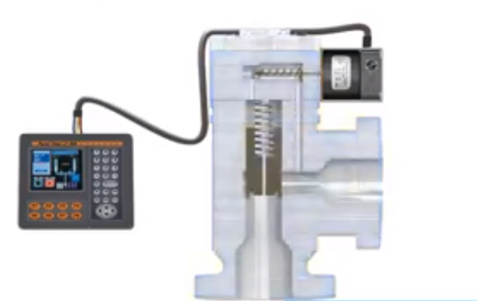 When the solenoid is energized the core opens the Pilot Orifice and relieves pressure from the top of the valve piston or diagram to the outlet side of the valve. This Results in an unbalanced pressure lifting the piston or diaphragm off the main Orifice. When the solenoid is de energized The pilot orifice is closed and full line pressure is applied to the top of the piston for diaphragm closing the valve. 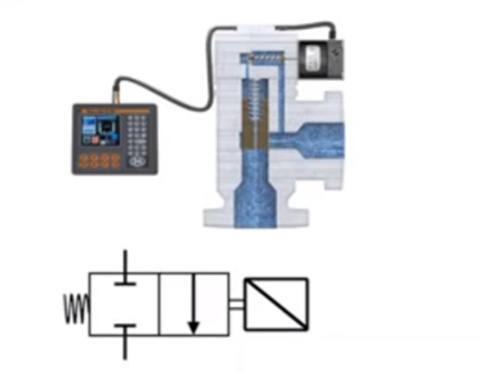 Most Directly operated valves also come in pilot operated versions and are designated by a triangular graphic symbol. 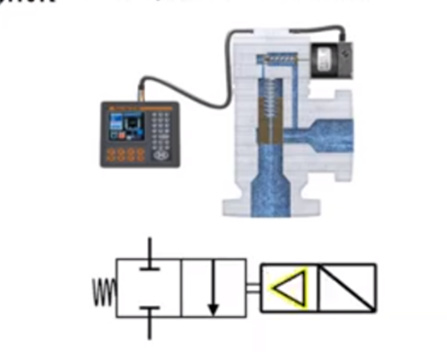 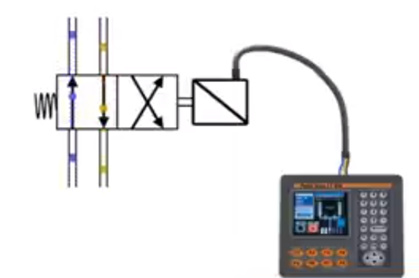 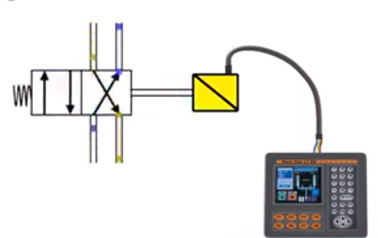 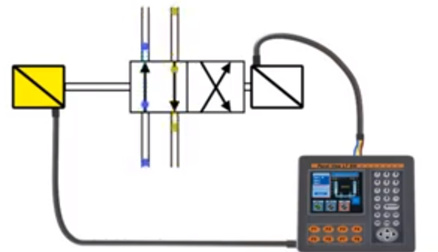 Double solenoid valves have 2 solenoids typically mounted on opposite ends of the valve body. This type of 2 position double solenoid valve does not have a spring return. when the first Solenoid is energized, The valves will shift into the first position, even if the first solenoid is deenergized, The spool remained shifted. This is because there is no spring to return this spool to its original position. Energising the second solenoid will send the valve to the second position. Even if the second solenoid is De energized, the valve will remain shifted until the first solenoid is re-energized. Since there is nothing holding the valve in the shifted positions, other than friction, these types of valves should be mounted horizontally to avoid self-shift due to excessive air flow or vibration. 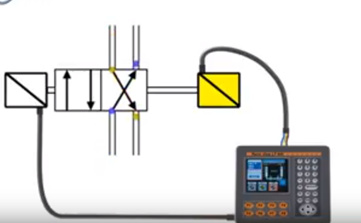 If both solenoids are energized at the same time, the solenoids will work against each other and may cause the spool to become stuck and electrical burn out of the solenoid or an overload of inrush current to the circuit any of which will cause severe damage to the system or valve . 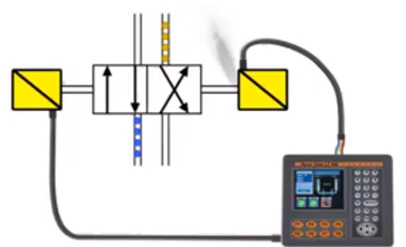 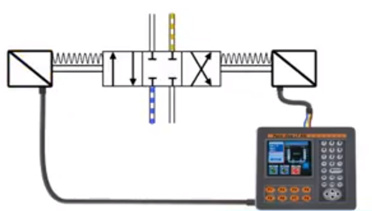 A 3-position valve has a spring centred neutral position for its internal spool. Because of the centring Springs, it’s necessary to hold current on one solenoid or the other to keep the spool in one of its side positions. When each solenoid is energized the valve shifts to the appropriate position. Anytime both solenoids are deenergized the valves spool will spring to centre and stop the fluid flow. Therefor a 3 position valve requires a maintained electrical signal for its operation. As before, energizing both solenoids at once may cause damage to the valve or to the system. To prevent this from occurring electrical circuits should be designed to make it impossible to have current on both solenoids at the same time. 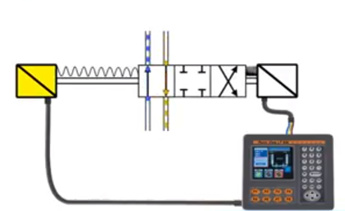 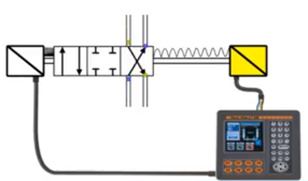 Solenoid valves are used in both hydraulic fluid and air systems to control direction on cylinders from deceleration or speed control and pump on loading or pressure control. the physical appearance of each component will vary greatly depending on brand ,size and type so care should be taken to reference the appropriate manufacturas guidance when choosing a solenoid valve.

THERE ARE 5 MAIN PARAMETERS TO CONSIDER WHEN SELECTING A VALVE: