Understand the basics of etherCAT technology from following article

EtherCAT (Ethernet for Control Automation Technology) Invented by Beckhoff automation in 2003. Ethernet based fieldbus,optimized for industrial automation control Based on CANOpen,a device profile for embedded system used in automation Standards defined and maintained by the EtherCAT technology group Difference between EtherNet and EtherCAT EtherNET - Designed to move large amounts of data through many different nodes Able to route data to and from billions of separate address allowing commun…

Can be any software and or hardware configured to assemble and receive EtherCAT datagrams Requires only standard ethernet physical layer components for communication Facilitates coordination between EtherCAT slaves,writing and receiving data from each slave in an EtherCAT frame. In motion control applications,the relevant data sent to the drives are profiling data. The data requested are position and input data.

Read and processes profiling data. Writes position input and drive status for return to the master Can be configured in for multiple modes of operation All slaves contain specific spaces in memory where data can be written These spaces are called objects,the entire memory space is called the object dictionary Each object has its own address,specified as an index /sub index 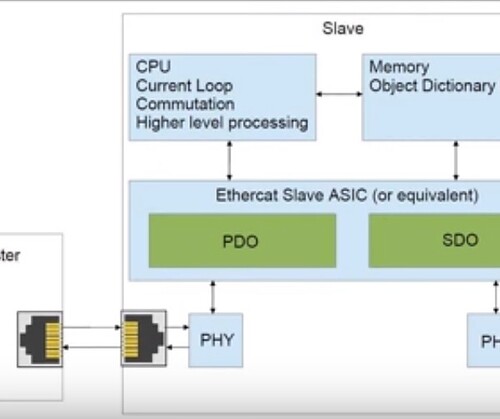