What is the valve positioner?

A valve positioner is a proportional controller that adjusts the output to the actuator based on control system input and feedback from the valve stem position. Pneumatic and electro-pneumatic positioners are used with pneumatic actuators to control infinite valve positioning and/or to provide the greater force. 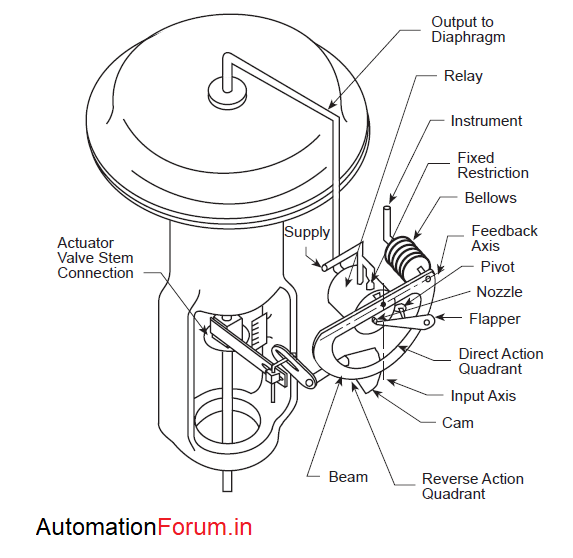 The figure shows the typical positioner and actuator interface for a single-acting pneumatic positioner.

Stem movement is fed back to the beam by means of a cam that causes the flapper to pivot slightly away from the nozzle. Nozzle pressure decreases, and the relay supply valve closes to prevent any further increases in output pressure. The positioner is once again in equilibrium but at a higher input signal and a slightly different flapper position.

When the input signal decreases, the bellows contracts to move the beam and pivot the flapper slightly further from the nozzle. The nozzle pressure and exhaust pressure decreases and the exhaust port in the relay opens to release diaphragm casing pressure to the atmosphere, permitting the actuator stem to move upward.

Stem movement is fed back to the beam by the cam to reposition the beam and flapper. When equilibrium conditions are obtained, the exhaust valve closes to prevent any further decreases in diaphragm case pressure. 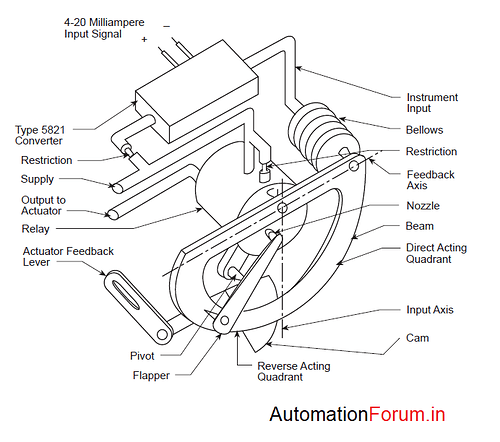 Each of the positioners can be configured to be direct-acting or reverse-acting. The cam can also be changed to modify the performance of the valve from linear action to equal percentage or quick opening.

The double-acting positioner is shown here with a current-to-pressure (I/P) converter.

As a result, the actuator rod extends and the actuator rotary shaft rotates clockwise. This causes the feedback lever to pivot clockwise, and the force that is applied to the summing beam by the range spring increases.

For the inverse action, the pressure of the input signal is channeled to both cavities A and B. An increase in the signal pressure results in an ascending force in the summing beam, turning the addition beam in the needle direction of the clock. and relay A to increase the lower pressure of the actuator cylinder. As a result, the actuator rod retracts, and the rotary axis of the actuator rotates counterclockwise. This causes the feedback arm to pivot to the left, reducing the force applied to the summation beam by the range spring.