Temperature switches are mechanisms used to measure or sense the variation of temperature. The temperature change causes the mechanism to change something in it and which converted to another form, at the other end and triggers any other mechanism.

There are two types of temperature switches:

Metals expand on heating, Bimetallic thermometers use this principle to sense temperature. But the level of expansion differs for each metal it depends on the linear temperature coefficient of the metal.

The bimetallic thermometer is constructed by bonding two dissimilar metal strip with equal size and unequal temperature coefficient. One end of the metal combo is kept at a fixed end and other free, on heating one metal will expand faster than the other end. As a result, the metal combo bends. This bending effect is used to trigger switching device.

The bending can be used to move the pointer of gauges, to do this the bimetallic strip should be fabricated into coils. 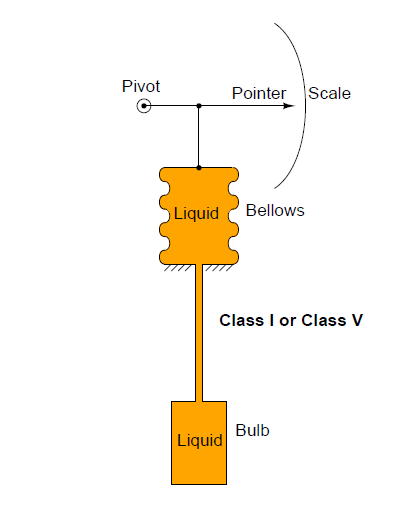 This is a filled bulb system, system filled with fluid. The largest volume of the fluid is kept at the bulb of the thermometer which has the highest sensitivity. The enclosed fluid expands when the bulb is heated and the expansion is converted mechanical force using secondary transducers such as bellows, bourdon tube etc.