Fire is a phenomenon that occurs when a material reaches a critical temperature and reacts chemically with oxygen (for example) that produces heat, flame, light, smoke, water vapour, carbon monoxide, carbon dioxide, or other products and effects.

Fire alarm system (Fire Alarm System) is a system that gives a signal / sign when an indication of a fire that consists of a component component detector / sensor as an input and Sound / light (horn / strobe) as an output warning, all of which controlled by a Zelio PLC (Programmable Logic Controller).

There are different types of fire detectors: 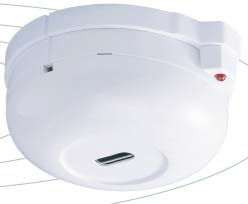 ROR (rate of rise) will work based on a mechanical contact (switch), which is controlled by two types of metal (bimetallic) that are formed in such a way that the switch is always OFF when normal conditions. If the detector receives heat until the specified point is bimetallic, it expands, so the switch will ON and this means the detector is detecting heat.

In addition to the work method as above, this detector will also be activated ON directly if the increase is more than 10 degrees Celsius per minute without waiting for the temperature to reach a predetermined point (rate of rise).

Fixed heat detector works based on mechanical contact (switch), where a barrier placed with a special adhesive material will make the switch always OFF when normal conditions. If the detector receives heat at a predetermined point then the adhesive will melt which results in the automatic detachment making the switch turn to the ON position, and this means the detector detects heat. Changing the switch from the OFF position to the ON position will immediately be forwarded to the panel as an indication of fire. The type of adhesive used will determine at what temperature the detector will start active, so the working temperature point, always but not affected by the speed of temperature rise. 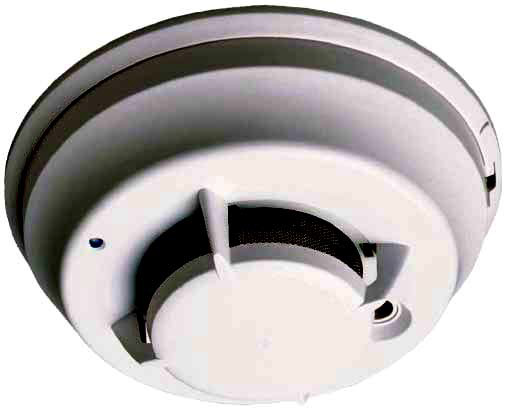 The smoke detectors detect the presence of smoke that indicates the fire. Smoke detectors are divided into two different categories according to their operating principle. Both must pass the same set of test fires to obtain a list of ULC products.

Ionization type detectors detect combustion products released in the early stages of fires that occur in most combustible materials. Particles which can be suspended in the atmosphere such as dust, vapours from drying paint, various gases such as Freon, FM-200 etc. as well as the small smoke particles may also cause the detector to respond.