What are valve positioners?

Valve Positioners are devices used to put the valve in the correct position by increasing or decreasing the air load pressure on the actuator. Valve positioners are used for controlling valve where accurate and rapid control is required without error or hysteresis.

There are different types of control valve positioners: 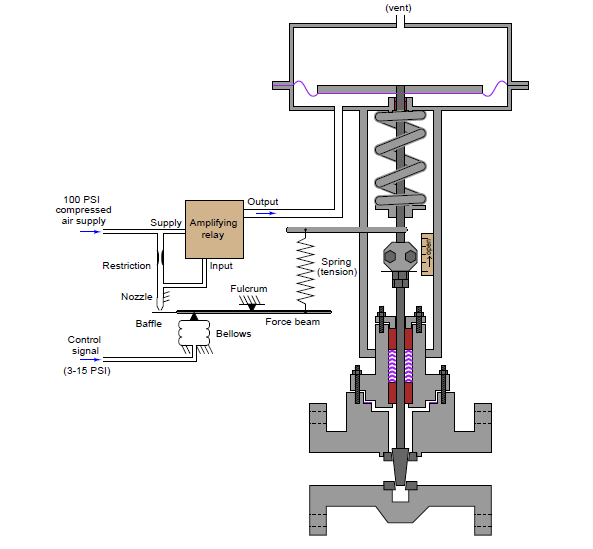 Closing the flapper nozzle increase the pressure to the valve diaphragm starts closing the valve.Like all force-balance systems, the force beam motion is constrained by the balancing forces, such that its motion is negligible for all practical purposes. In the end, equilibrium is achieved by one force balancing another, like two teams of people pulling oppositely on a length of rope, so long as the two teams’ forces remain equal in magnitude and opposite in direction, the rope will not deviate from its original position. 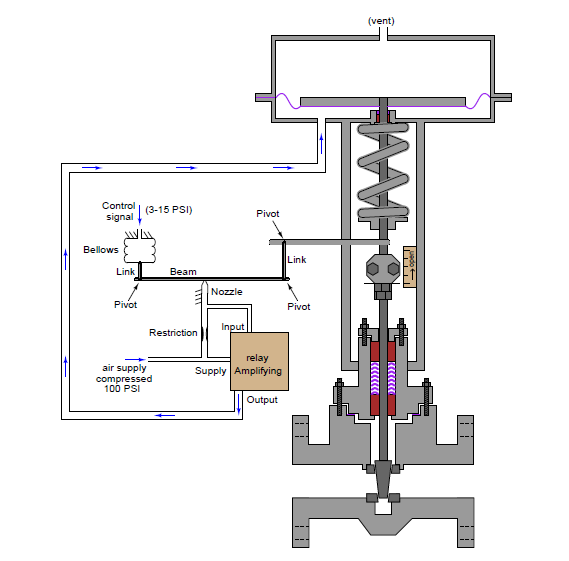 In this mechanism, an increasing signal pressure causes the beam to advance toward the nozzle, generating increased nozzle backpressure which then causes the pneumatic amplifying relay to send more air pressure to the valve actuator. As the valve stem lifts up, the upward motion imparted to the right-hand end of the beam counters the beam’s previous advance toward the nozzle. When equilibrium is reached, the beam will be in an angled position with the bellows’ motion balanced by valve stem motion. 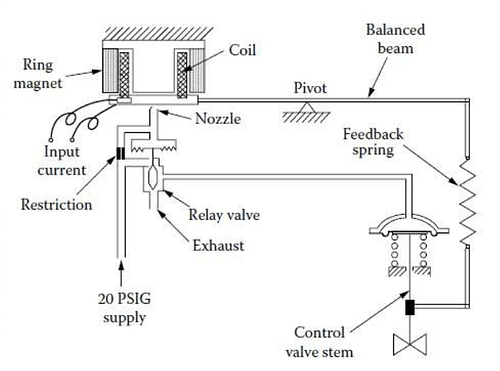 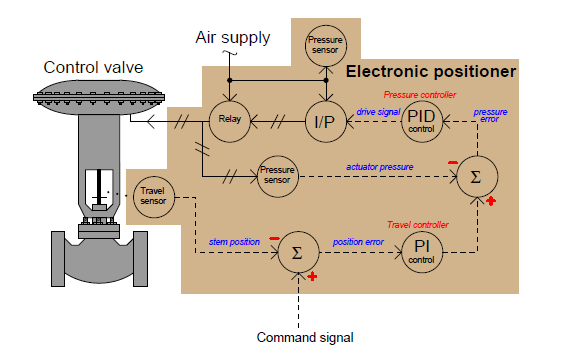 Electronic valve positioners, use an electronic sensor to detect valve stem position, a microprocessor to compare that sensed stem position against the control signal by mathematical subtraction (error = position − signal), then a pneumatic signal converter and relay(s) to send air pressure to the valve actuator.

The command signal tells the positioner where the valve stem should be positioned.

The positioner (PI) calculates how much air pressure at the actuator should be needed to achieve the requested stem position.

The next controller (PID) drives the I/P(current-to-pressure) converter as much as necessary to achieve that pressure. If anything causes the valve stem to not be at the commanded position, the two controllers inside the positioner work together to force the valve to its proper position.