In the treatment of clean water and waste water, the measurement of turbidity is becoming an important control indicator for manufacturing processes in every kind of manufacturing industry. Mostly Nephelometry is used to analysis water. 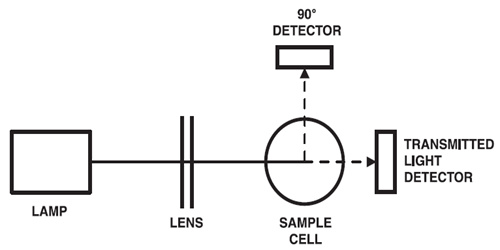 A Nephelometry measurement analysis the light reflected from the glass sample. A long-life tungsten bulb is used as the light source. The light from this source is converted to parallel light rays by a condensing lens, and then is passed through a glass window into the measuring chamber.

A measuring chamber between 5 mm and 300 mm in diameter can be chosen according to the turbidity of the fluid. In the chamber, the light is reflected, absorbed and dispersed by the material suspended in the fluid.

The transmitted light and part of the dispersed light pass through the chamber and arrive at the detectors. The detector consists of two photocells. The scattered light is generally measured at an angle of 90°. This measurement principle is known as nephelometry.

The straight photocell (PC1) detects the transmitted light, and the photocell at 90° (PC2 ) captures the dispersed light. The ratio of the output from these two photocells, which depends on the relative amounts of transmitted and dispersed light coming from the measurement chamber, is determined by the calculation circuit. As a result of these calculations, influences from fluctuation in the light source and the color of the liquid being measured are eliminated.

If the photoelectric current for PC1 is I1 and that for PC2 is I2, then the relationship of these values with turbidily within the measurement range is given approximately by the following equations:

= the current due to the transmitted light when the turbidity and color components are zero,

are constants determined by the shape of the measuring chamber.

K is a constant determined by the characteristics of the photocells, the length of the measuring chamber, and the color component.

Taking the ratio of I1 and I2, we obtain: