Top 10 Latest Sensors which can be integrated with Arduino

In this post, we are going to list the top 10 sensors which can be integrated into Arduino for various project requirements.

What is Arduino and how to use it in projects?

MQ2 is a gas sensor from the MQ sensor series that is widely used. It is a Metal Oxide Semiconductor (MOS) type Gas Sensor, also known as Chemiresistors because the detection is dependent on a change in the sensing material’s resistance when the Gas comes into contact with it. A simple voltage divider network can be used to detect gas concentrations. 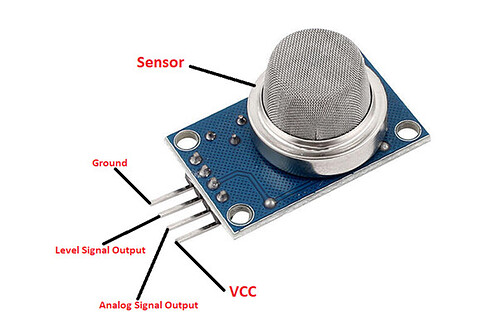 The MQ2 Gas Sensor uses roughly 800mW and works on 5V DC. It has a detection range of 200 to 10000ppm for LPG, Smoke, Alcohol, Propane, Hydrogen, Methane, and Carbon Monoxide.

How does a gas sensor work?

When tin dioxide (semiconductor particles) is heated to high temperatures in the air, oxygen is adsorbed on the surface. Tin dioxide donor electrons are attracted to oxygen adsorbed on the sensing material’s surface in clean air. This interrupts the electricity flow.

The surface density of adsorbed oxygen reduces in the presence of reducing gases when it reacts with the reducing gases. The tin dioxide is subsequently bombarded with electrons, allowing current to freely flow through the sensor. 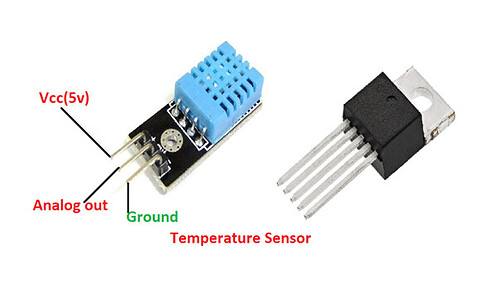 Unlike linear temperature sensors calibrated in Kelvin, the LM35 device does not require the user to remove a huge constant voltage from the output in order to gain convenient Centigrade scaling. To attain typical accuracies of 14°C at ambient temperature and 34°C over a temperature range of 55°C to 150°C, the LM35 gadget requires no extra calibration or trimming.

How does the temperature sensor work?

They are gadgets that use electrical signals to measure temperature data. When a change in temperature is detected, the sensor’s two metals generate electrical voltage or resistance. The temperature sensor is essential for maintaining a set temperature in any device that produces anything from medication to beer. The accuracy and responsiveness of the temperature and temperature control are crucial to ensuring the finished output is ideal while producing this type of material. In industrial applications, the temperature is the most prevalent physical measurement. Accurate measurements are essential for these processes to succeed. Temperature sensors are used in a variety of less-obvious applications. Chocolate melting, blast furnace control, hot air balloon control, and material freezing

A flame-sensor is a type of detector that detects and reacts to the advent of a fire or flame. The response of the flame detector can be affected by its configuration. An alarm system, a natural gas line, propane, and a fire suppression system are all included. In industrial boilers, this sensor is employed. The major purpose of this is to verify whether or not the boiler is operating properly. Because of the mechanism used to detect the flame, these sensors have a faster and more accurate response than a heat/smoke detector.

How do Fire sensors work?

Particles in the air are detected by smoke alarms. They usually achieve this by employing one of two detection technologies.

Ionization detectors are the first. These work by electrically charging, or ionising, the air molecules between two metal plates using a small amount of securely insulated radioactive material. This causes a little electric current to flow in the air from one plate to the next. When particles enter the chamber, they attract and carry away the ions, lowering the current. The device will register the particles as smoke and sound an alert when the number of particles entering the chamber is sufficient to drop the current below a specific level.

Mechanical things such as the mouse and keyboard are gradually being replaced with touch sensor technologies. Without actual contact, a touch sensor senses a touch or close proximity. Many applications, such as mobile phones, remote controllers, and control panels, are incorporating touch sensors. Touch sensors can now take the role of mechanical buttons and switches. 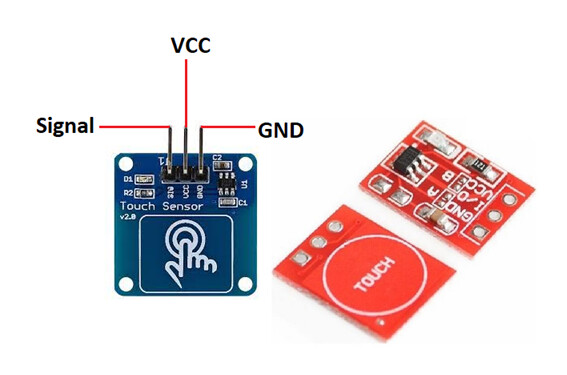 A touch sensor functions as a switch, opening an electrical circuit and allowing currents to flow through it when contact, touch, or pressure is applied to its surface.

The Colour Sensor is a full-featured colour sensor. A TAOS TCS3200 RGB sensor chip and four white LEDs make up the device. To some extent, it can detect and measure a virtually infinite spectrum of visible colours. The chromatic light that an object reflects in white light (sunlight) after it absorbs the remainder is what we see as its colour. The colour white is a blend of many visible hues, which implies it comprises red ®, yellow (Y), green (G), blue (B), and purple § §. Any colour is created by blending the three primary hues (red, green, and blue) in a specific proportion, according to the notion of three primary colours.

Humidity sensors are electrical devices that detect and report the moisture and air temperature of the environment in which they are used, such as air, soil, or tight spaces. 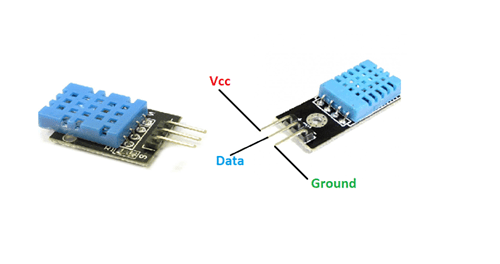 Humidity measurements reveal the amount of water vapour present in the atmosphere. They report their findings in the form of an electronic signal. They also provide relative humidity information, which is defined as the ratio of moisture in the air to the maximum moisture at a given temperature.

Many applications, such as HVAC (Heating Ventilation Air Conditioning) and comfort optimization applications in Smart Buildings and Facilities Management, use relative humidity.

Humidity sensors are classified into three types. They are: 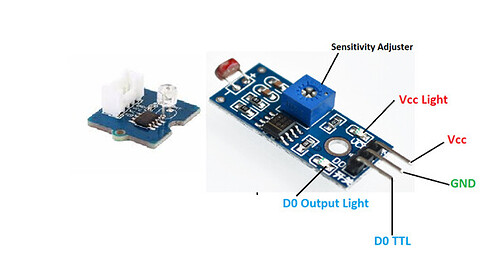 Photoresistors, also known as light-dependent resistors (LDRs), are light-sensitive devices that are typically used to detect the presence or absence of light or to quantify the intensity of light. Their resistance is quite high in the dark, sometimes up to 1M, but when exposed to light, the resistance reduces rapidly, perhaps down to a few ohms, depending on the light intensity. LDRs are nonlinear devices with a sensitivity that varies with the wavelength of the light applied. They are employed in a variety of applications, however alternative devices such as photodiodes and phototransistors can sometimes render them obsolete.

Photoelectric sensors detect the presence or absence of an object using a beam of light. Its light-emitting element emits a visible or infrared light beam. The light beam reflected from the target is detected using a reflective-type photoelectric sensor. The light-emitting element emits a beam of light, which is received by the light-receiving element. A single housing houses both the light-generating and light receiving devices. The light reflected from the target is detected by the sensor.

PIR sensors detect movement and are almost always used to determine whether a human has entered or exited the sensor’s range of detection. They’re compact, inexpensive, low-power, easy to use, and they don’t break. As a result, they’re common in household and commercial appliances and gadgets. “Passive Infrared,” “Pyroelectric,” or “IR motion” sensors are other names for PIR motion sensors.

How do PIR Sensors work?

The PIR sensor itself contains two slots, each of which is built of a unique IR-sensitive substance. Because the lens utilized here isn’t doing anything, we can see that the two slots can ‘see’ out past a certain distance (basically the sensitivity of the sensor). Both slots detect the same amount of IR emitted by the room, walls, or outdoors when the sensor is turned off. One-half of the PIR sensor is intercepted when a warm body, such as a human or animal, passes by, resulting in a positive differential change between the two halves. The sensor generates a negative differential change when the warm body leaves the sensing area, resulting in a negative differential change. These changes in pulses are detected by the PIR sensor. 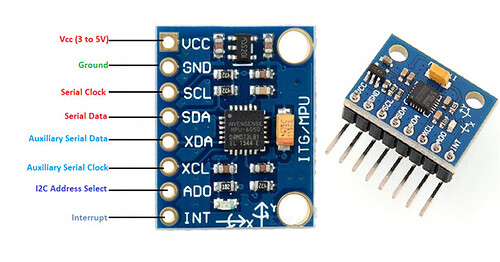 A sound sensor, also known as an acoustic sensor, is a module that detects and converts sound waves based on their depth. A capacitive microphone, a height detector, and a sound-sensitive amplifier are all built within the sound sensor. 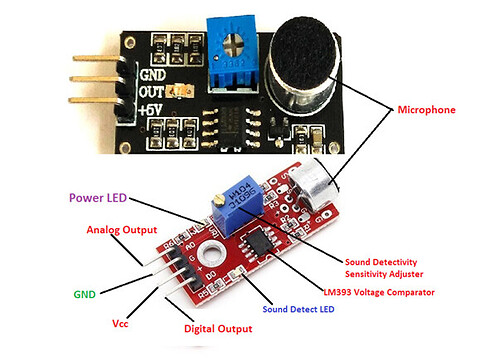 Because the microphone that comes with the IoT sound sensor can record noise levels. It’s ready to explore the surrounding ambient sound inside the audible frequency spectrum for the human ear, displaying the results in decibels. This information is useful in locations where noise pollution levels are high or where noise levels are regulated.

Sound sensors simulate the human frame system, which includes the ears and signals transmitted to the brain.

The microphone is a sound sensor that converts a sound signal into a readable digital signal. A small diaphragm product of magnets is usually used, which is enclosed by a coiled steel wire.

Sound waves cause the diaphragm to oscillate, which causes the magnets to vibrate and produce a current within the coil. Dynamic, ribbon, and condenser microphones are the most typical microphones utilised for the song.

Although microphones are the most well-known sound sensors, electrostatic and piezoelectric sensors are also employed to detect sound in commercial, medical, robotics, identification, and tracking applications.