What is a thermocouple? 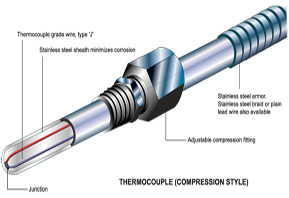 A thermocouple is an active transducer which measures temperature, which works under the principle of Seebeck, Peltier, Thomson effect.

The thermocouple is the transducer which directly converts temperature into current, It is a simple device made by joining to dissimilar metals or semiconductor forming a junction. It produces a voltage when the temperature at the junction changes. 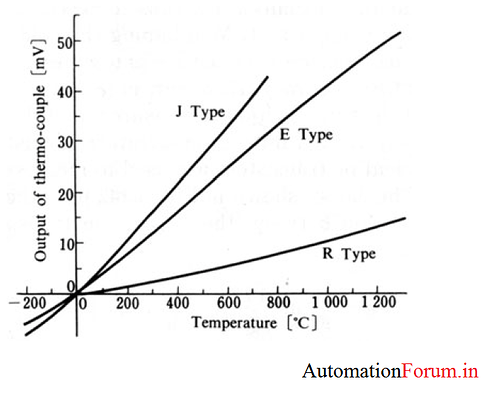 There are differences in the characteristics according to the type of thermocouple, in all cases, the signal of the electric potential is extremely small, which varies from an electromotive force of a few mV to several tens of mV. The impedance of the thermocouple is small, but it is necessary to make the measurements without the current flowing in the thermocouple. Therefore, high input impedance amplifiers must be used.

The relationship between the VBE of the transistor and temperature is expressed as:

where T is the absolute temperature (K), Vgo is the energy gap of silicon at T = 0 (K), k is the Boltz man constant, q is the electronic charge, A is the geometric constant of the transistor, r is a parameter related to the base region diffusion constant, Ic is the collector current 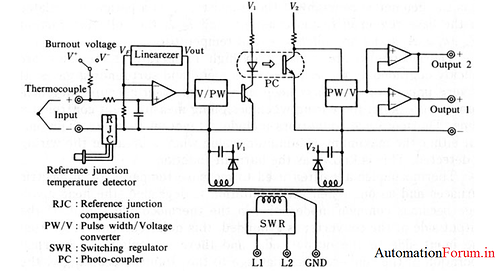 The thermocouple signal was converted into an alternating signal by a chopper before the amplification, to avoid direct current drift in the amplifier. After the amplification, the signal is converted back to a direct current. However, low drift monolithic operational amplifiers that have high output impedance are now available. The amplified signal is converted into an optical pulse signal. On the secondary side, it becomes again an electrical signal, thus achieving isolation.

Thermocouples are exposed to high temperatures, so they are degraded rapidly by the reactions between the metal and the surrounding gases. It is very important to always bear in mind the degradation of this thermocouple and the interruptions in the wiring when designing the measurement control systems. Thermocouple converters include a function to make their output the maximum or minimum value when a cut is detected in the wiring. This is known as the exhaustion function.

2 Likes
What is Thermoelectricity and how is it related to Peltier, Seebeck and Thomson effects