Thermal level switches either sense the difference between vapour space and liquid temperatures or, more commonly, the increase in thermal conductivity as a sample is submerged in the liquid process.

One of the simplest designs for a thermal level transition is a heated temperature monitor with a continuous volume of heat input. 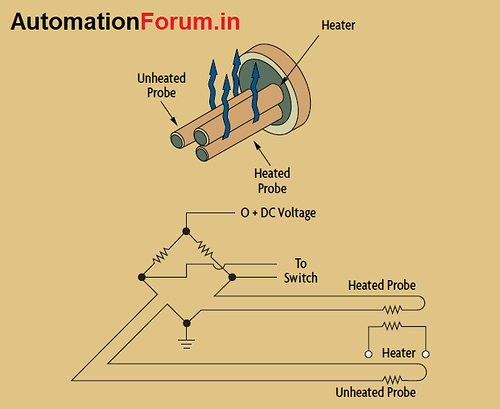 The probe stays at a high temperature as long as the probe is in the vapor space, though low-conductivity vapors do not drain any heat from the probe. When the probe is submerged, the liquid absorbs more heat and the probe temperature drops. When this temperature change happens, the mechanism becomes triggered.

Second type of thermal meter consist of two Resistance Temperature Detectors (RTDs) are used by the thermal sensor, both installed at the same height. One probe is heated and the other has a comparison that is unheated. Both sensors ’ outputs are fed into a Wheatstone bridge.

The hot probe will be cooler than the reference probe while the sensor is in the vapor phase and the bridge circuit will be unbalanced.

When both samples are dissolved in the liquid phase, their temperatures reach the liquid temperature. Their contributions are going to be almost identical and the bridge is going to be in equilibrium. This level function is triggered when a bridge balance change takes place.

Since all process products have a signature heat transfer coefficient, to detect the presence or absence of any substance, thermal level switches can be calibrated. Such switches can therefore be used in complicated device implementations such as controllers, slurry and sludge