Stepper motors are devices that used to set the rotation in the desired position, In a stepper motor, the rotor moves in discrete steps from one equilibrium position to the next. Stepper motors are widely used in a variety of applications, the most notable of which is in the field of computer peripherals such as printers, tape drives, winch controllers and memory access systems such as hard drives.

Types of the stepper motors based on working principle:

Two basic types of stepper motors can be constructed : (a) Variable reluctance (VR) type and (b) the permanent magnet (PM) type. Of the two varieties, currently, the PM type has a wider range of applications.

The variable reluctance structure is shown below: 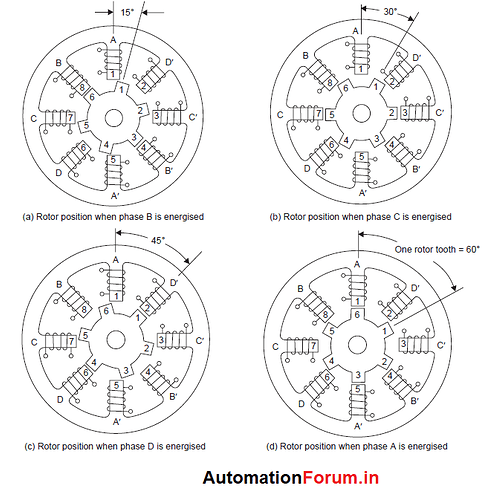 Besides, each stator tooth has a coil wound on it and coils separated by 180° in space are grouped together as a single phase. stator coils A and A′ forms a single phase and will be referred to as phase A. So, we have phases B (with stator coils B and B′), C (stator coils C and C′), and D(stator coils D and D′) respectively in the stepper motor shown in the figure.

Variable reluctance step-by-step operation is based on the “minimum reluctance” principle. The magnetic device moves in such a way that the magnetic field can always find the path of least resistance. Then, when phase B is energized, the teeth of rotor 3 and 6 (R3, R6) will align with stator teeth 4 and 8 (S4, S8) and will remain in this position while the same phase remains energized. Under this condition, the motor has moved one step and is in a stable equilibrium condition as long as the excitation remains in the coils B-B '. The excitation in the coil provides the holding torque and no movement will take place until a change in excitation occurs.

When the excitation of phase B is stopped and phase C is excited, the teeth of the rotor R2, R5 will be aligned with the stator teeth S3, S7 as shown in figure b. Then, it is found that the rotor moves to the right at an angle of 15 degrees (60 - 45 = 15). This process can be repeated for phases D, A, and then back to B (see figure). In each case, the rotor moves 15 degrees and with a complete sequence of phase B excitations, C, D, A and B will produce a 60 degree rotation. Therefore, six such cycles are required to cause a complete revolution of the 360 ° rotor and the stepper motor will be referred to as a “24 step / revolution” motor.

Permanent Magnet motor consists of a multi-phased stator and a two-part, permanent-magnet rotor both of them are also toothed just like in the variable reluctance stepper motor. The opposite ends of the rotor in the present case are north and south poles of a permanent magnet with the teeth at these ends being offset by half a tooth pitch.

Using a bipolar power supply, the motor can be driven in the full-step mode with the switching scheme shown in Fig-a employing two tristate switches, S1 and S2. In the figure, phase A is connected to positive supply while phase B is connected to off position. A possible method of realising such a switching circuit is shown in Fig-b.

In actual operation, a microprocessor would determine the number of steps needed to cause a load to be moved a certain distance. The processor would then transmit the information, together with direction and step timing data, to a discrete digital hardware package. The latter would keep track of the total number of steps moved and would implement the appropriate switching sequence.