Sound and its measurement are important since it relates to the sense of hearing, as well as many industrial applications, such as for the detection of flaws in solids, and for location and linear distance measurement. Sound pressure waves can induce mechanical vibration and hence the failure.

Sounds are pressure waves that travel through air, gas, solids, and liquids, but cannot travel through space or a vacuum, unlike radio (electromagnetic) waves. The amplitude or loudness of sound is measured in phons.

Sound pressure level (SPL): units are often used in the measurement of sound levels, and are defined as the difference in pressure between the maximum pressure at a point and the average pressure at that point. The units of pressure are normally expressed as:

Decibel (dB): The decibel (dB) is a logarithmic measure used to measure and compare amplitudes and power levels in electrical units, sound, light, and so forth. The sensitivity of the ears and eyes are logarithmic. To compare different sound intensities, the following applies:

When comparing different pressure levels, the following is used:

where P1and P2 are the pressures at two different locations. 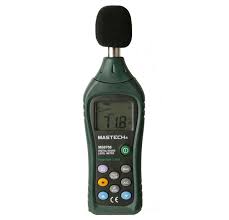 Microphones are pressure transducers and are used to convert sound pressures into electrical signals. Electromagnetic, capacitance, ribbon, crystal, carbon, and piezoelectric are different types of microphones used to measure sound.

The figure shows an electromagnetic and capacitive type microphone: 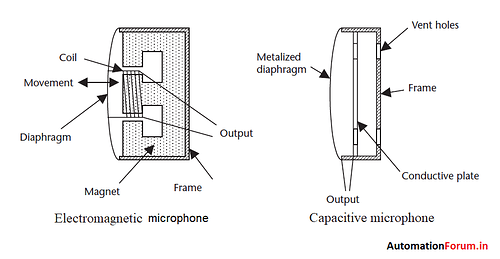 The electromagnetic microphone consists of a coil in a magnetic field driven by sound waves impinging on a diaphragm. An EMF is induced in the coil by the movement of the diaphragm.

And the capacitive microphone, which is an accepted standard for accurate acoustical measurements. Sound pressure waves on the diaphragm cause variations in the capacitance between the diaphragm and the rigid plate. The electrical signals then can then be analyzed in a spectrum analyzer for the various frequencies contained in the sounds, or just to measure amplitude.

Features of a good microphone: