Resistance measurement; 2, 3 or 4 wire connection – How does it work and which to use?

A single wire connects each end of the RTD element in a two-wire RTD. It’s the simplest wire arrangement. The computed resistance will encompass all elements of the circuit, implying a higher margin of error. Because there are just two wires in the circuit, they are unable to compensate for any additional resistance imposed by other components.

Although systems can be calibrated to reduce inaccuracy, this is not always the most precise or best solution.

As a result, a two-wire RTD is frequently utilised in applications with short wires, high resistance sensors, or where precision is not critical. 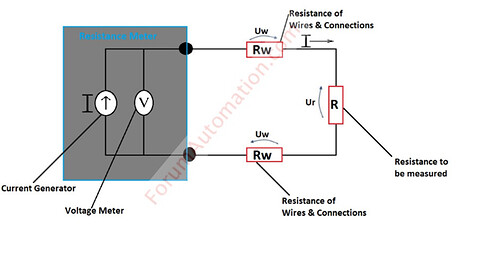 Lead resistance will, in fact, be the most common source of inaccuracy. Using test leads with a combined resistance of 100m to perform a two-wire resistance measurement on a 500m resistor, for example, will result in a 20% measurement error in addition to the instrument’s error.

The three-wire architecture of an RTD is the most common, with one wire connected on one side and two-wire connections on the other. This compensates for the additional resistance induced in the circuit, resulting in a more accurate readout.

The most popular type of RTD is a three-wire RTD, which is accurate in most applications. However, if the cables have various resistances, there will be mistakes. As a result, a four-wire RTD is advised for a completely accurate solution.

In practice, using/installing four wires can be time-consuming and costly. The 4-wire connection can be simplified by using a 3-wire connection instead. It makes use of three wires, as you would have imagined.

In a 3-wire connection, the aim is to remove one of the wires and assume that the resistance of the remaining wires is similar. 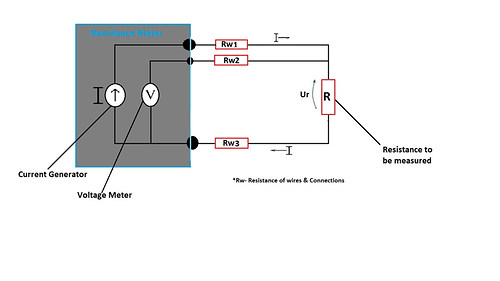 Then it changes to a normal connection (as shown in the illustration) to measure the connected impedance R, and it incorporates the results of the resistance of the previously measured wire into the test result.

In industrial applications, a 3-wire connection is frequently a suitable compromise; it is accurate enough while requiring one fewer wire than a perfect 4-wire measurement.

The 4 wire RTD is, without a doubt, the most sophisticated option; this is reflected in the price of this type of RTD. They’re mostly employed in scientific settings where high precision is required.

Because it can compensate for mistakes caused by wire resistance, this circuit is utilised for longer wire lengths between the measuring element and the measurement electronics.

With contrast, in a 3-wire circuit, all wires are believed to have the same resistance. The 4 wire RTD circuit assumes that each wire has its own resistance measurement. To obtain the most accurate reading of all RTDs, this compensates for the full wire resistance.

For low resistance measurements, a separate methodology is employed to lessen the effect of test lead resistance due to the constraints of the two-wire method. Test engineers can utilise the four-wire (Kelvin) connection to measure DUTs with resistances equal to or less than 1k.

Voltage drop in the test leads is removed because the voltage is measured at the DUT (this voltage could be significant when measuring low-resistance devices).

Although the sense leads may carry a tiny current (normally less than 100pA), it is usually inconsequential and can be ignored for all practical purposes.