What is process control?

The selection of what process control mode to use in a process is the function of the characteristics of the process.

The entire process should be described by the process equation, for each process the equation changes considering the control parameters. For example, a temperature system and its process equation is shown below: 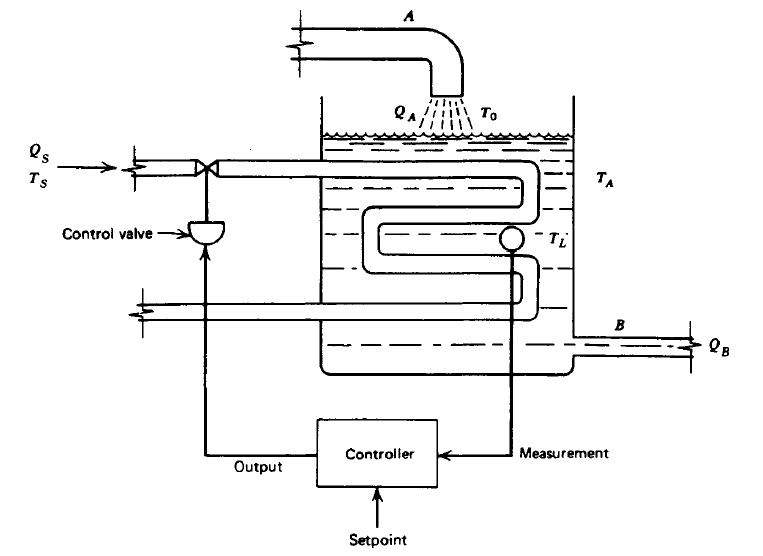 In a process, it is possible to identify a set value for the process parameter that results in a controlled variable having the setpoint value. This set of parameters is called nominal set. The required controlling variable value under this condition is the nominal value of the parameter.

If the setpoint is changed, the control parameter is altered to cause the variable to adopt this new operating point. The load is still nominal, however, because the other parameters are to assumed unchanged.

Suppose one of the parameters change from nominal, causing a corresponding shift in the controlled variable. Then there is process load change is occurred. The controlling variable is adjusted to compensate for this load change and its effect on the dynamic variable to bring it back to the setpoint.

Another type of change involves a temporary variation of one of the load parameters. After this excursion, the parameter return to the nominal value. This variable is called transient. A transient is not a load change because it is not permanent.

Process control operation is essentially a time-variation problem. At some point in time, a process load change or transient causes a change in the controlled variable. The process-control loop responds to ensure that, some finite time later, the variable return to the setpoint value. Part of this time is consumed by the process itself and is called the process lag.