I’m dealing with a 1986 pioneer power amplifier. It keeps blowing a fuse upon pressing the power switch. It immediately creates a spark at what I assume the power supply section is. That’s actually part of my question. The big transformer is an audio transformer? And the power supply is the picture labeled “fan?” Or is that giant transformer the power transformer? I inspected the board as thoroughly, visually, as I could. Nothing looks burned. Any ideas as to what the problem might be? The spark flies out of the area I labeled “fan” it seems to have tons of voltage regulators so I assumed that’s the power supply 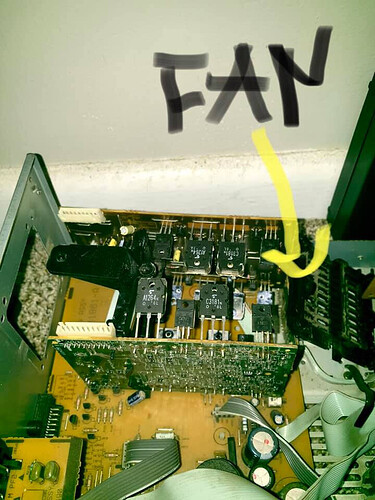 It must be the power supply transformer. Audio signal transformers of such size are only used in tube amps, and those have different outputs/inputs (never as many as the one in your pic has). The yellow&black wires in the third pic probably lead (through the fuse and probably across some RF filter) to mains wires, don’t they?

What about the transistor have you ever tested it, if not check one by one of those transistors. A bias spreader transistor failing open can blow the fuse as well. Also, the output stage along with its drivers can hold the voltage across the failed transistor at pretty much the expected value, so that may be tricky to diagnose.