An alarm system can be built in different ways with using an electromagnetic relay or by using solid-state gates. Here we discussing the correct way of ladder logic program using relay logic.

Consider a large building that contains several numbers of detectors, which are activated with several latching switches as shown below: 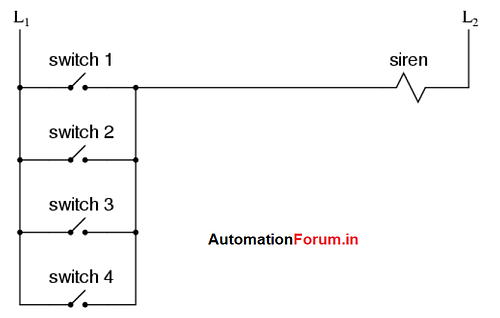 The idea is if one of the switches is actuated the siren should energize. It seems that the relay logic should be incredibly simple: just use standard-open switch contacts and connect them all in parallel

With four switch inputs, this is the OR logic function. This circuit could be expanded to include any number of switch inputs, each new switch added to the parallel network.

This logic program has a drawback that it cannot detect an electric failure. Which is shown in the figure below: 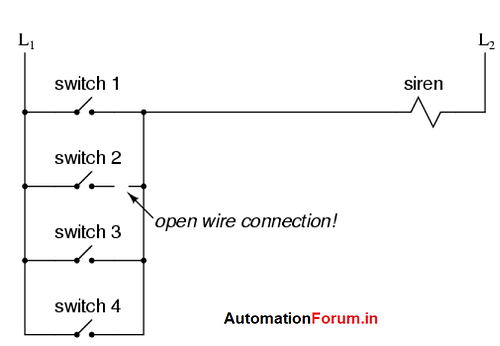 If the electric failure occurred, the result will, even if the switch is activated it would no longer energize the siren. Obviously, in a fire alarm system, this is not good.

That way, a failure in the wiring would result in a false alarm. Unless the system was regularly tested no one would know that there was a problem until in an emergency somebody tried to use that switch.

In this system, the logic is rearranged from the above example. We would have to re-wire the switches so that the alarm was sounded by an open contact instead of a closed contact.

When all switches are switched off (the regular operating state of this system), relay CR1 will be energized, thus keeping contact CR1 open, preventing the siren from being powered.

However, if any of the switches are activated, the CR1 relay will de-energize, close the CR1 contact and sound the alarm. Also, if the wiring breaks anywhere in the circuit’s top rung, the alarm will sound.

This circuit design is referred to as fail-safe as default to the safest mode in the event of a common failure such as a broken connection in the switch wiring.