PLC in comparison with other control systems

The logic function is produced by connecting the input and output contacts. The relay logic provides this contact automatically. Combinations of various logic elements may be used to create fairly complex control plans.

Powerful low-cost micro- and minicomputers are available and are often used in both sequence and continuous control systems. Microprocessor-based control panels are small enough to locate at (or near) the point of final control, simplifying connection requirements.

In large processes, it is now common for several microcontrollers to be used instead of a single large mainframe control computer, with resulting benefits in performance, cost and reliability.

Each micro can provide optimal local control, as well as being able to send or receive control data via other microcontrollers or a host supervisory computer (mini or micro). This is termed distributed control and allows for the greater sophistication of control than was with a centralized strategy using a single large computer since the control function is divided between several dedicated processors. 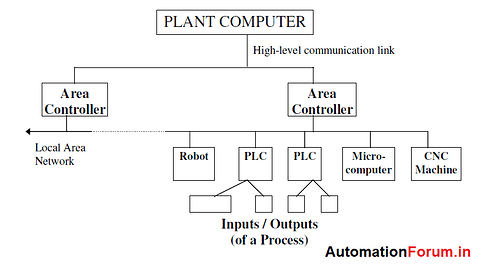 PLC can be implemented under the distributed system. Appropriate software applications packages are loaded and run on the system. This software handles the configuring of the I/O cards, together with data processing required to carry out the control plan. There is frequently a very ‘friendly’ operator interface via a dynamic graphics display.