The continuous method performs the leak detection process continuously all the time when the process fluid passes through the pipeline. There are different such modern technologies used for leakage check. Classified as External and internal detection methods.

The external method verify the pipe from the outside do not disturb the pipeline. The internal methods are implemented in the pipe line.

For leakage detection fiber optics cable is installed along and outside the pipeline. The principle is that the leaked fluid molecule interact with the fiber optic cable. So, the temperature of the cable changes due to this contact. By measuring the temperature changes in fiber cable leak could be detected. 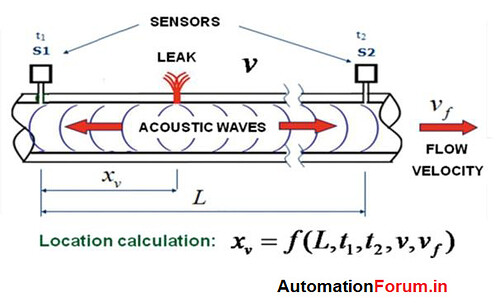 The received signal is stronger near the leak site thus enabling leak localization. The most common approach for detecting and localizing of leakage involves the cross-correlation. In general, the technique is based on detecting the noise that occurs when a leak exists in the pipeline.

The method works by placing sensor devices on both sides of the pipes where the leak is suspected. Location of the leak can be identified based on sound propagation velocity, time lag and distance between sensing points.

Video monitoring detects gas leaks using infrared made possible through video camera using special filter. The filters will be sensitive to a certain spectrum of infrared wavelengths. By analyzing the soil above the pipeline the presence of leakage and its location could be estimated. Producing low false alarms along with detect-ability of very small leaks could be mentioned as advantages of this method. But it is expensive.

A semipermeable hose is installed near to the pipeline, in time cycle a test gas is pumped through the hose. A gas detector is installed at the other end of the hose.

The gas detector analyse the presence of hydrocarbons. The difference between medium out of the pipeline and test gas from the hose can be used to derive the leak site.

This method detects the occurrence of leaks by comparing the current pressure signal with a running statistical trend taken over a period of time along the pipeline by pressure monitoring and flow monitoring devices. The principle of this method is based on the fact of pressure drop as a result of leak occurrence. Using an appropriate statistical analysis of most recent pressure.

If the pipe is a closed system, the total mass flow in a period of time will be constant. In standard pipe networks, the flow that enters and leaves pipes can be measured. A leak can be identified if the difference between the upstream and downstream flow measurement changes beyond the established threshold value.

A statistical leak detection system uses an advanced statistical technique to analyze the measurements of flow velocity, pressure and temperature of a pipeline. This method is suitable for complex pipe systems as it can be monitored continuously to detect continuous changes in the line and in the flow / pressure instruments. In addition, this technique could be used to locate leaks. The use of statistical analysis is also very easy and applicable in different pipe systems.

The difference between the measured value and the estimated value of the flow is used to determine the presence of leaks. For building the model, the pressure and temperature at the both end of the pipeline is measured.