An actuator is a device that converts the input electrical signal into mechanical energy. Various actuators have been developed and put to practical use according to various types of input energy, for example there are electricomagnetic, pneumatic, hydraulic actuators. Here are we are going to look about piezoelectric actuator

The piezoelectric actuator is a device that makes use of the inverse piezoelectric effect. When a voltage is applied across a PZT element in the longitudinal direction (axis of polarization), it will expand in the transverse direction (perpendicular to the direction of polarization). When the fields are reversed, the motion is reversed. The motion can be of the order of tens of microns, with forces of up to 100N. A two-layer structure with the layers polarized in the same direction and the two layers act as a single layer. If two layers are polarized in oppositedirections are shown in Figure below as 1st and second picture respectively.

Such a structure can have a movement of up to 1 millimeter and produce forces of several hundred Newtons. Multilayer devices can be made to obtain different kinds of motion. Piezoelectric actuators are normally specified by free deflection and blocked force. Free deflection is the displacement at maximum operating voltage when the actuator is free to move and does not exert any force. Blocked force is the maximum force exerted when the actuator is not free to move. The actual deflection depends on the opposing force. Here shows an example of pezioelectric actuator controlling the flow of fluid in a pipeline: 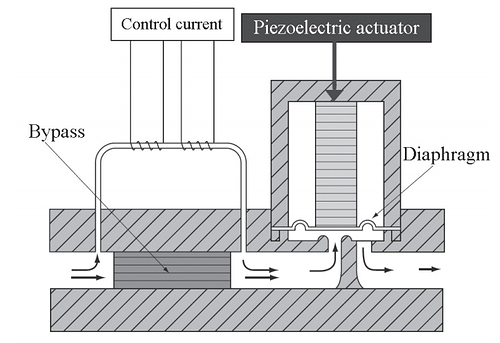 The multilayer actuator is sealed with inactive gas in a metal casing that has a bellows like structure. As the flow varies the current input the piezoelectric material varies and which will affect the diaphragm opening.