Parts of a Globe valve

What is Globe valve?

What are the types of Globe Valves?

Based on the type of disc arrangement

Based on body type

Based on the type of Body Bonnet Connection

What are the parts in the globe valve? 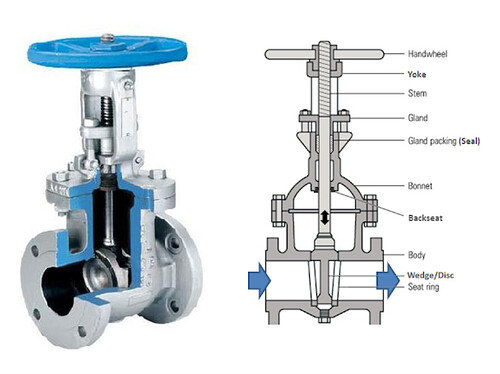 The hand wheel’s role is to rotate the stem and introduce or remove the plug from the seat, enabling or cutting fluid flow. A valve actuator is an example of a hand wheel (the part that controls the stem and disc movement). It is outside the pressure boundary (the pressure induced by the fluid within the pipe and valve) and hence only suffers stresses put on it while operating the valve in service circumstances, namely the torque generated by turning the hand wheel.

The gland and gland stud compress the gland packing onto the stem and serve as a seal to prevent valve leakage. They are subjected to pressure stresses as a result of compressing the gland packing and, in this instance, are constructed of bronze, most likely to avoid corrosion due to contact with seawater. These parts are most likely manufactured by casting the pieces and then machining the circular portion. This piece should be tested to ensure it can withstand the pressure being applied to it by pressurising it from the outside and determining the maximum pressure it can withstand before yielding.

The bonnet is the component of the valve that closes the opening. It is a pressure-bearing portion that holds the full pressure of the fluid as it flows through the valve with the body as its service loads. A threaded stud and nuts hold it in place. It also serves as a support for the gland, and in this case, constructed of bronze, the bonnet is normally made of the same material as the valve body.

The gland packing seals the bonnet and stem, preventing water leaks, and is pressed into place by the gland follower, which is a length of string cinched up and gripping the stem. Because it will be in contact with sea water, it will need to be replaced on a regular basis as the string wears out. The string will most likely be constructed of a durable polymer, and its flexibility and elastic coefficient can be determined by performing tensile tests on it.

Gaskets are static seals in a joint that expand to fill flaws in the material when clamped on its surfaces. They can be constructed of materials like Teflon or compressed paper, like the one we looked at, which has non-adsorbent binding agents. Because the gasket will be subjected to pressure and seawater wear, it will most likely need to be replaced over the valve’s lifetime. Tensile stress testing on the gasket should be performed to determine where the material breaks. Gaskets are also evaluated in what is known as a “hot compression test,” in which the gasket is crushed in a hydraulic press and the temperature is raised while the thickness of the gasket is measured.

The stem is attached to the plug by the disc stem nut. Its threading secures it to the disc, while the stem’s broader plane holds the screw in place. When screwed, the disc will be forced against the disc stem nut’s wider hexagonal plane. It will have service loads on its threads, will be compressed when the valve is closed, and will be exposed to the full pressure of the fluid flowing through the valve. This piece, like the rest of the sections in touch with sea water, is composed of bronze, but stainless steel might be used instead.

The plug’s job is to prevent the valve from opening, allowing, or restricting fluid flow. It is screwed into the disc stem nut, which secures it to the stem. When lowered, it compresses against the seat and restricts the flow. The plug will withstand the full pressure of the fluid flowing through the valve and must form a tight seal with the seat, while the threading will withstand the load of the fluid’s pressure exerting an upward push on it. Because it will be in contact with sea water, this item will be made of bronze, with stainless steel as an alternate material. It was most likely sand or die-cast and then turned on a lathe to form its thread. Its edges will be machined to ensure a secure fit with the seat. It must be tested for yield point upon compression and thread strength, as well as the greatest force it can withstand as a load.

The valve body serves as the framework to which all of the other components are joined. It is the valve’s main pressure boundary, which means it will bear the full weight of the pressure of the fluid flowing through the valve, as well as loads of the pipes connecting to it. It serves as a container for fluid flow and accepts fluid input and outflow. The valve body is sand cast, and its side is rotated to seal and attach the gasket. It is machined on both sides to accommodate the bolts snugly. The component is milled for a snug fit of the bonnet, with a pilot finding the hole and a flat seat provided for the nuts.

The seat is the section into which the plug inserts, and in the valve under consideration for this study, the seat is integrated into the body. It is machined into it and must maintain an impenetrable seal with the disc. The seat will be tested alongside the body.

Advantages and Disadvantages of globe valve

Parts of a Needle valve

Parts of a Ball valve

Parts of a Butterfly valve