Parts of a Choke valve

What is a choke valve?

Choke valves are used to control flow rate and reduce pressure for downstream processing of generated fluids. Effective chokes lower the possibility of downstream equipment damage, allow for a longer production timespan, and relieve stress from field operators by keeping them away from the wellhead. 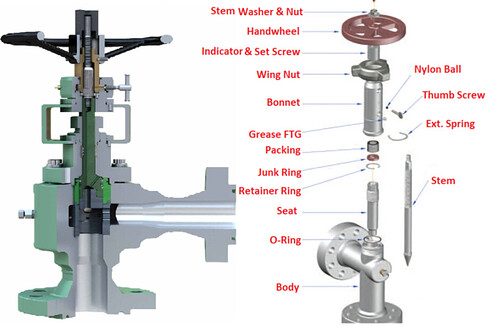 What is the need for a choke valve?

Why choke valve is necessary?

The stem is the shaft that connects the internal ball to the valve’s exterior, allowing the ball to revolve.

The valve body, which also houses the disc and stem, is the principal pressure-retaining component. This also permits flow from the valve; its end connection is a pipe; depending on the size and pressure of the piping system, this end can be welding type, threaded, or a variety of others.

The valve body can be cast or forged in a range of materials, including cast steel, stainless steel, and alloy steel, depending on the application.

Retaining rings, also known as snap rings or circlips, are metal fasteners that are inserted into a groove on a shaft, as well as in a housing or bore, to hold an assembly in place. The devices use a compact, lightweight design that requires fewer machining processes than traditional fastening procedures.

The Bonnet is the second pressure-retaining component of the valve. It is also known as a cover. We can attach a valve enclosure to the system by bolting, welding, or threading it.

The valve stream can pass through the opening in the gate, stop, or diaphragm wall. During maintenance, the bonnet enables access to the valve’s internals.

Thrust washers are flat washers that are used to link a rotating component to a stationary component. They provide axial support or side-to-side motion on a shaft while also inhibiting movement along that shaft. A thrust washer is a surface on which a bearing can rest.

Nuts are used to tighten various small parts of the equipment to each other. It also strengthens the equipment

Advantages and Disadvantages of Choke Valve

Parts of a Check Valve

Parts of a Needle valve

Parts of a Ball valve

Parts of a Butterfly valve

Parts of a Globe valve