We have to know the process of boiler before looking into the P&ID diagram. The main system commonly found in all types of boiler manufacturing is: 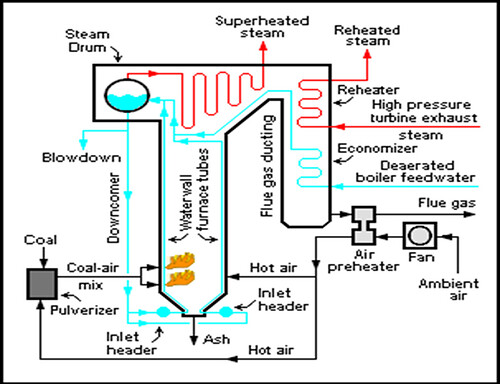 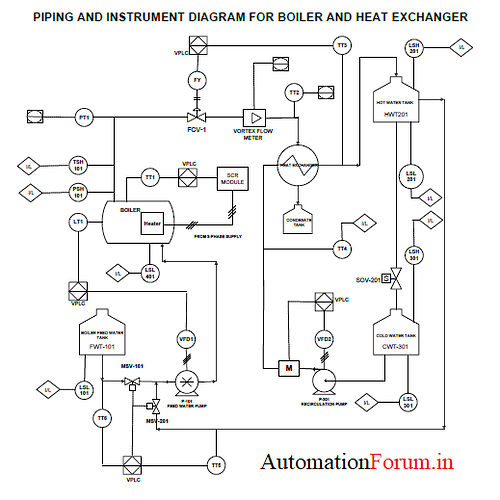 After getting to know about the main components of the boiler, we have to know the process of the boiler. In general, inside the boiler there are 3 processes, namely:

From the economizer, water is then supplied to the steam drum through a pipe. At the beginning of the process, when steam (water vapour) has not reached saturated steam, the separator in the steam drum will bypass and let the water go down to the next stage.

Here, a downcomer in the form of a pipe flows water to the bottom of the next system via lower connecting pipes.

Water from the downcomer will enter the furnace at the bottom and be store inside. The bottom header is then due to the coal combustion system, oil and limestone inside. Furnace, will slowly change shape to wet steam. According to its nature, steam will propagate up by itself in the tube (because of the constant heating process in the boiler).

This is where the energy conversion system happens. After that, the steam will be supplied again to the steam drum through the upper connecting pipes, and, back.

This is the most important pipe in the power plant process because this pipe will supply superheated steam to the turbine. The material, the welding wire and the test (Non Destructive Test) are classified as special because they require special treatment and a special team to do it. This is where the highest temperature and pressure in the boiler is located.