It is an electronic device to measure the proportion of Oxygen in the fluid that is analysed. It is also refer to as Lambda sensor.

The most common application is measuring exhausting as concentration of oxygen for internal combustion engines. In automobiles to dynamically adjust the air fuel ratio so that catalytic converters to work optimally.

This is the zirconia based Oxygen Analyzer. Zirconia is ceramic material that is conductive at high temperatures and the conductivity increases as temperature increases. Heating the zirconia Element coated with a thin layer of platinum on both sides.

Principle of operation. The difference in the amount of oxygen between the sample gas and the standard atmospheric oxygen. This difference result in voltage generation Due to the movement off the oxygen molecules. Heating allows the Oxygen molecules to adhere to the element surface.

Construction of the probe. Ceramic cylinder plated Both inside and outside with porus. Platinum electrode Protected by a metal gauze. The probe encases Heating elements.

Working of the Zirconia probe

Used for measuring oxygen dissolved in a liquid. This has a electrochemical bath setup of a cathode and an anode submersed in an electrolyte with Oxygen entering the sensor through a permeable membrane by diffusion to be reduced at the cathode, creating a measurable electric current. Constant stirring Is needed because Oxygen is consumed for the reading And the Stagnant water might Ran out of its Oxygen . For microsensor applications this can be used without stirring, used in study of plant tissue

Oxygen is a paramagnetic material. So that It is attracted to the point of maximum field strength. The Magnitude of Dumb Bell Displacement is proportional to the amount of oxygen in the sample. Deflection of the dumbbell is detected by A Light Beam. from a source exterior to the cell. the dumbbell body with the mirror reflects the light beam to a photo cell. The output of the photo cell is calibrated to the oxygen concentration.

A fluorescent Strip at the tip of the probe Is used for oxygen analysis. The florescent strip Absorbs the oxygen. And its fluorescence properties is reduced with Increasing oxygen concentration.

The calibration parameters of oxygen analyser are as follows.

For calibration sensor offset is to be determined To minimise error. The probe is heated to 700 degrees Celsius and reference gas is connected to it. Allowing the program operating temperature to settle for 30 minutes. The offset sensor EMF in RUN mode in mV is noted from the lower line. Switching back to set up mode and entering sensor offset with same polarity and magnitude is the calibration for sensor offset.

Impedance of the probe. Is responsible for the error signal. As impedence rises error signals increase. To test impedence, the meter is set to read ohms and measurement is taken within Couple of seconds to avoid the sensor polarization that happens very quickly, the meter is then reversed and the reading is repeated. Average of the 2 readings taken should not be above 10K in which case sensor needs to be replaced. Sensor fail is activated And alarm raised if the impedance value is above the specified value.

Sensor heater. A Heater failure will give the Heater fail alarm. Heaters ought to be tested with a continuity test where the heater element impedance should be around 100 ohms And the Heater insulation should be 10 M ohms. In case the heater is open or short circuited the probe is replaced.

A/D. Calibration. Accuracy is maintained in the Analyzer by constantly checking the reference value which is fed into a Battery backed memory. The analyser continuously checks the values and update it’s zero and span correction factors.

D/A calibration. Whenever The new values for the A/D Calibration is entered D/A values need to be set. For an Output Response. Of 4mA to 20mA, Calibration is first set for 4mA by comparing to a multimeter attached to the channel.

The Zirconia Electrode has a Definite Life time because of material loss over time. The best Indication for the life expectancy is The impedance of the probe. Probe. failure can be determined by the sudden and rapid increase in its impedance values. 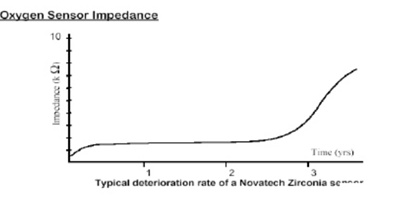