What is the OSI Model

The OSI stands for Open Systems Interconnection, OSI consists of seven-layer that are used by computers to make communicate over a network. It is developed in the early 1980s and is referred to as the first standard model for network communication.

The TCP/IP model is used nowadays instead of the OSI model. Due to the feature to visualize and communicate how network operation OSI model is still used by many companies. The OSI model also helps isolate and troubleshoot problems in the network.

Characteristics of the OSI Model

The important characteristics of OSI models are

What is TCP/IP Model?

TCP/IP stands for Transmission Control Protocol/ Internet Protocol. It was created as a concept to provide a highly stable and end-to-end byte stream over an unreliable internet connection.

TCP/IP gives an idea about how each and every computer should be connected to the internet and how can you send and receive data between them. It also helps you to make a virtual network while connecting two or more computer networks. 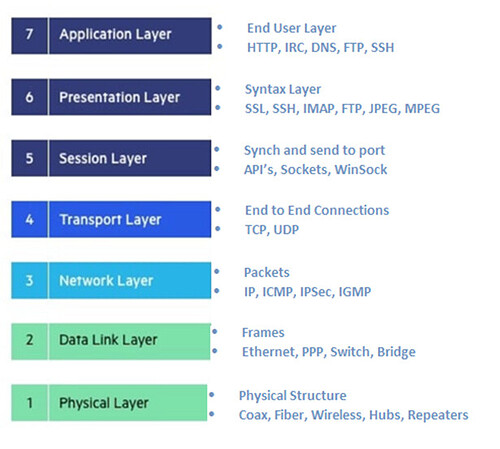 The Presentation Layer is the OSI model’s sixth layer. The Translation Layer is another name for this layer. The function of the presentation layer is to transmit the data from the application layer to the session layer. Because it is responsible for maintaining the right syntax of the data it either receives or sends to another layer, the presentation layer is also known as the Syntax layer (s). This layer clearly specifies how the data is encoded, encrypted, and compressed between the two devices and makes sure that the transmitted data is received correctly on the receiver’s end.

In the open systems interconnection (OSI) network model, the transport layer is the fourth layer.

The OSI model breaks down the transporting data in the network to 7 small groups. Each of the seven OSI levels has a task or group of tasks allocated to it.

The network layer serves two primary purposes. One method is to divide segments into network packets and then reassemble the packets on the receiving end. The other method is to route packets by determining the best path across a physical network.

The data link layer is the second layer of the OSI layered model. This layer is one of the most complex layers and has complex functions and responsibilities. This layer hides the underlying hardware details and is referred to as a communication to the upper layers.

The data link layer works between two hosts that are somehow directly connected. This direct connection can be a point-to-point connection or a broadcast. The systems in the broadcast network must be on the same connection. Datalink layer work tends to be more complex when there are multiple hosts in a single collision domain.

Advantages and Disadvantages of OSI model

Advantages of OSI models are

Disadvantages of OSI models are

Advantages and Disadvantages of TCP/IP model

Advantages of TCP/IP models are

Disadvantages of TCP/IP models are