Why Taps are required?

Beyond the vena contracts, there is a rapid recovery in the static pressure. Owing to friction and dissipation of energy in turbulence, the maximum downstream pressure is always lesser than the upstream pressure. The pressure loss so caused depends upon the differential pressure and increases as the orifice ratio decreases for a given rate of flow. The differential pressure obtained with an orifice plate will depend upon the position of the pressure taps. The points to be observed while locating the taps are :

There are five common locations for the differential pressure taps : 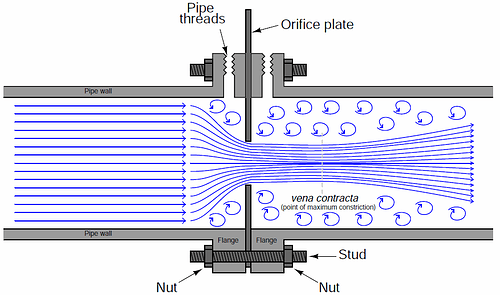 They are predominantly used for pipe sizes 50 mm and larger and the centerlines are 25 mm from the orifice plate surface. They cannot be used for pipe size of less than 35 mm diameter. Since the vena contracts may be closer than 25 mm from the orifice plate. Flange taps are the most popular tap location for orifice meter runs on large pipes. Flanges may be manufactured with tap holes pre-drilled and finished before the flange is even welded to the pipe, making this a very convenient pressure tap configuration. Most of the other tap configurations require drilling into the pipe after installation, which is not only labour-intensive but may possibly weaken the pipe at the locations of the tap holes. 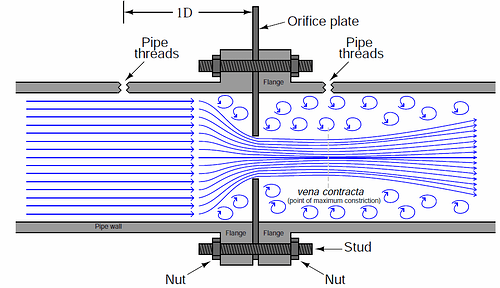 Venacontracta taps offer the greatest differential pressure for any given flow rate, but require precise calculations to properly locate the downstream tap position. Radius taps are an approximation of venacontracta taps for large pipe sizes (one-half pipe diameter downstream for the low-pressure tap location). An unfortunate characteristic of both these taps is the requirement of drilling through the pipe wall. Not only does this weaken the pipe, but the practical necessity of drilling the tap holes in the installed location rather than in a controlled manufacturing environment means there is considerable room for installation error. 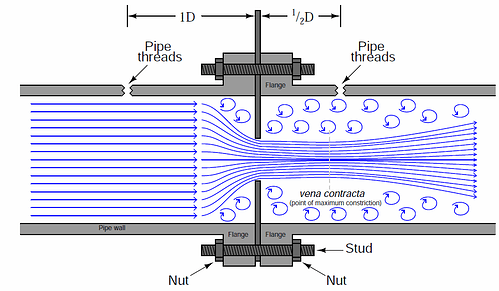 d1 = D and d2 = 1/2 D. These are similar to vena contracts taps except that downstream tap is located at one half-pipe diameter. These are generally considered superior to the vena contracts tap because they simplify the pressure tap location dimensions and do not vary with changes in orifice β ratio. 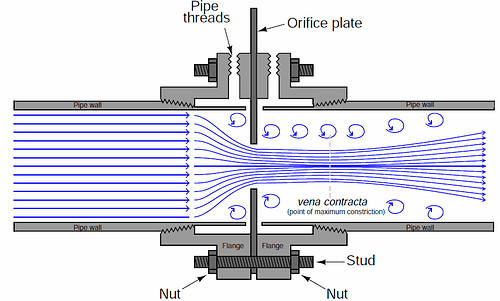 These taps are similar in many respects to flange taps, except that the pressure is measured at the ‘Corner’ between the orifice plate and the pipe wall. These are used for diameters of less than 50 mm. Corner taps must be used on small pipe diameters where the vena contracts is so close to the downstream face of the orifice plate that a downstream flange tap would sense pressure in the highly turbulent region (too far downstream). Corner taps obviously require special (i.e. expensive) flange fittings, which is why they tend to be used only when necessary.

Pipe taps are located 2.5 pipe diameters upstream (d1 = 2.5D) and 8 diameters downstream (d2 = 8D) from the orifice plate. Because of the distance from the orifice, the exact location is not critical, but the effects of pipe roughness, dimensional inconsistencies and so on are more severe. Care should be taken to avoid measuring downstream pressure in the highly turbulent region following the vena contracts. This is why the pipe tap (also known as full-flow tap) standard calls for a downstream tap location eight pipe diameters away from the orifice: to give the flow stream room to stabilize for more consistent pressure readings