An ion chamber measures the electric charge of ions generated from the interaction of neutrons and the chamber structure and are located on the outside of the reactor core. The output of an ion chamber is a flow of current directly proportional to the incident neutron rate.

The housing and central electrode is usually pure aluminium because of its low residual activity as a result of neutron bombardment.

Since neutrons are uncharged, the lining of the chamber must be a coating of material, which will emit charged particles under neutron bombardment. Boron-10 was chosen because its high cross-section for the (n, α) reaction with thermal neutrons gives high sensitivity. This is important because ion chambers are mounted outside the reactor core where the number of neutrons is limited. Location of ion chamber is located below: 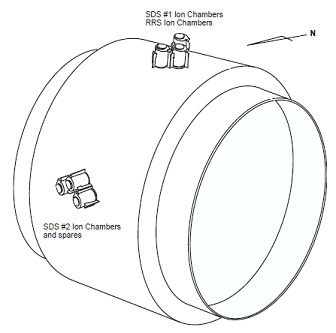 The metal used for the electrode and outside casing is usually pure aluminium because of its low residual activity as a result of neutron bombardment. A high polarizing voltage (typically +600 V) is applied to the aluminium housing, while the centre electrode is normally kept at ground potential. 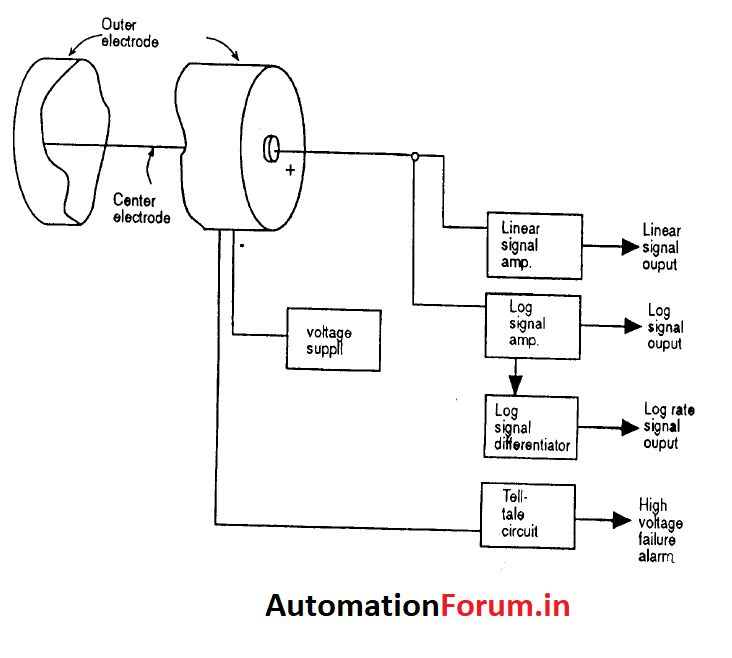 In the ion chamber, neutrons bombard the boron coating and release alpha particles (α) positively charged. When a rapidly moving alpha particle collides with a gas atom, it expels an electron from the atom and leaves behind a positively charged ion. This makes the gas conductive with the so-called ion pairs that are attracted by the electrodes charged by the polarization voltage. This creates a flow of electrical current, which can be detected by an external circuit. The amplifiers produce three separate signals as illustrated in the above image, then process the current signal.