There are particular protocols followed in the communication to transferring data and files in industries. 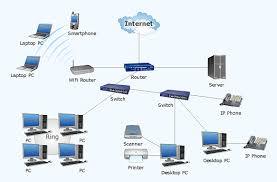 The protocol standards that help make this happen are as follows:

The Internet Protocol (IP) layer is responsible for getting packets of data to a physical network interface device, which involves mapping the IP address in the packet header to a physical address. Devices that receive an IP packet forward it on to the next closer device to the destination specified by its address. At this level, the protocol is said to be unreliable because packets can be discarded if problems occur.

The TCP layer provides a connection from source to a destination, which looks like a sequential stream of characters to the programmer. As such, it has to deal with packet dropouts, as well as potential reordering, based on time stamps.

Most commercial real-time operating systems include “networking stacks,” which implement the various layers of protocol so that the embedded system can be a networked device. These stacks typically include some of the applications covered in the following section, such as Telnet and FTP, and are usually additional-cost items. They are also almost always present in Unix and Windows operating systems.

A socket is a pipe that works over a network, where a pipe is the operating system’s way of connecting the output of one program to the input of another. This could be done by the first program writing a temporary file and the second program reading it; however, Windows and Unix provide pipes built into the operating system, which eliminate the need for temporary files and are more efficient.

Using sockets, a program on one computer can communicate with a program on another computer on the LAN much as two programs on the same computer-use pipes.

Telnet is a TCP/IP application that allows a user on a host computer to log into a remote computer or device as if he or she were on a terminal attached to that computer or device. A Telnet user is either in command mode, issuing commands that affect the Telnet session, or input mode, where the characters go straight into the input processing of the device.

FTP is an application on top of TCP/IP, which allows a user to interactively perform remote file operations, such as sending or receiving text or binary files, deleting, and renaming them. It is a TCP/IP application in the “client-server” model, where the user is the client and the remote computer addressed by FTP is the server. FTP works by creating two connections, one for commands and one for data.

NFS enables mounting a remote file system, making it appear to be a local disk drive. Thus, a client node is able to perform transparent file access over the network. By using NFS, a client node operates on files that reside on a variety of servers and server architectures, and across a variety of operating systems. File access calls on the client (such as read requests) are converted to NFS protocol requests and sent to the server system over the network.

The HyperText Transfer Protocol is a mechanism designed to allow and promote file sharing. It does not require a lot of code to implement, and is fast enough to support information sharing among workgroups, which might be widely distributed across a network. It is a generic, stateless protocol, which can be extended by adding methods and data representations.

On the Internet, HTTP is run over TCP/IP. An HTTP session starts with a connection by a client to an HTTP server; the client sends request messages to which the server responds. Then the connection is closed by either or both participants. The protocol in detail defines the formats for requests and responses.

A client request is typically in the form of an address in string form called a Uniform Resource Locator (URL). It defines the location of a page the client would like to access. An example is http: // www.hp.com, the URL for the Hewlett-Packard corporation. Note that the first part of the URL through the / / denotes a protocol such as HTTP. Other protocols are allowed in URLs, such as ftp:

VXI-11 is a testing and measurement industry standard that allows ASCII-based communications between a controller and a device over the LAN, using IEEE 488 (GPIB) style access.