Pulse Width Modulation (PWM) is a commonly used technique for generally controlling DC power to an electrical device, made practical by modern electronic power switches. However it also finds its place in AC choppers. The average value of current supplied to the load is controlled by the switch position and duration of its state. If the On period of the switch is longer compared to its off period, the load receives comparatively higher power. Thus the PWM switching frequency has to be faster.

Typically switching has to be done several times a minute in an electric stove, 120 Hz in a lamp dimmer, from few kilohertz (kHz) to tens of kHz for a motor drive. Switching frequency for audio amplifiers and computer power supplies is about ten to hundreds of kHz. The ratio of the ON time to the time period of the pulse is known as duty cycle. If the duty cycle is low, it implies low power.

The power loss in the switching device is very low, due to almost negligible amount of current flowing in the off state of the device and negligible amount of voltage drop in its OFF state. Digital controls also use PWM technique.PWM has also been used in certain communication systems where its duty cycle has been used to convey information over a communications channel. 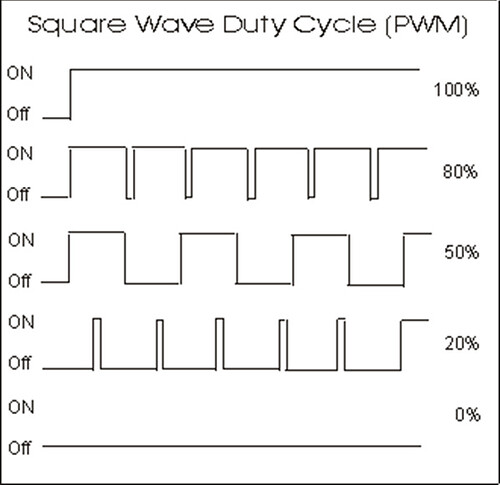 PWM can be used to adjust the total amount of power delivered to a load without losses normally incurred when a power transfer is limited by resistive means. The drawbacks are the pulsations defined by the duty cycle, switching frequency and properties of the load. With a sufficiently high switching frequency and, when necessary, using additional passive electronic filters the pulse train can be smoothed and average analogue waveform recovered. High frequency PWM control systems can be easily implemented using semiconductor switches.

As has been already stated above almost no power is dissipated by the switch in either on or off state. However, during the transitions between on and off states both voltage and current are non-zero and thus considerable power is dissipated in the switches. Luckily, the change of state between fully on and fully off is quite rapid (typically less than 100 nanoseconds) relative to typical on or off times, and so the average power dissipation is quite low compared to the power being delivered even when high switching frequencies are used.

Use of PWM to deliver DC power to load

Most of the industrial process requires to be run on the certain parameters where speed of the drive is concerned. The electric drive systems used in many industrial applications require higher performance, reliability, variable speed due to its ease of controllability. The speed control of DC motor is important in applications where precision and protection are of essence. Purpose of a motor speed controller is to take a signal representing the required speed and to drive a motor at that speed.

Pulse-width modulation (PWM), as it applies to motor control, is a way of delivering energy through a succession of pulses rather than a continuously varying (analog) signal. By increasing or decreasing pulse width, the controller regulates energy flow to the motor shaft. The motor’s own inductance acts like a filter, storing energy during the “ON” cycle while releasing it at a rate corresponding to the input or reference signal. In other words, energy flows into the load not so much the switching frequency, but at the reference frequency.

Use of PWM to deliver AC power to load

Modern semiconductor switches such as MOSFETs or Insulated-gate bipolar transistors (IGBTs) are quite ideal components. Thus high efficiency controllers can be built. Typically frequency converters used to control AC motors have efficiency that is better than 98 %. Switching power supplies have lower efficiency due to low output voltage levels (often even less than 2 V for microprocessors are needed) but still more than 70-80 % efficiency can be achieved. 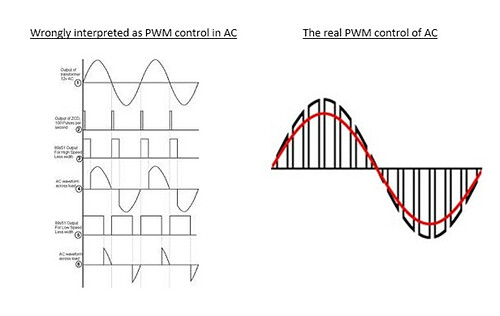 This kind of control for AC is power known delayed firing angle method. It is cheaper and generates lot of electrical noise and harmonics as compared to the real PWM control that develops negligible noise.

In many applications, such as industrial heating, lighting control, soft start induction motors and speed controllers for fans and pumps requires variable AC voltage from fixed AC source. The phase angle control of regulators has been widely used for these requirements. It offers some advantages such as simplicity and ability of controlling large amount of power economically. However, delayed firing angle causes discontinuity and plentiful harmonics in load current and a lagging power factor occurs at the AC side when the firing angle increased.

These problems can be improved by using PWM AC chopper. This PWM AC chopper offers several advantages such as sinusoidal input current with near unity power factor. However, to reduce the filter size and improve the quality of output regulator the switching frequency should be increased. This causes high switching loss. Another problem is the commutation between the transferring switch S1 with freewheeling switch S2. It cause the current spike if the both switches are turned on at the same time (short circuit), and the voltage spike if the both switches are turned off (no freewheeling path). To avoid these problems, RC snubber were used. However, this increases the power loss in the circuit and is difficult, expensive, bulky and inefficient for high-power applications. The AC chopper with zero current voltage switching (ZCS-ZVS) is proposed. Its output voltage regulator needs to vary switching-off time controlled by PWM signal. Thus, it is required to use frequency control to achieve the soft switching and the general control systems use the PWM techniques producing switching-on time. This technique has advantages such as simple control with sigma-delta modulation and continues input current.