A passive infrared sensor (PIR sensor) is an electronic sensor that measures infrared (IR) light radiating from objects in its field of view. They are most often used as motion detectors.

All objects with a temperature above absolute zero emit heat energy in the form of radiation. Usually this radiation isn’t visible to the human eye because it radiates at infrared wavelengths, but it can be detected by electronic devices designed for such a purpose.

The term passive in this instance refers to the fact that PIR devices do not generate or radiate energy for detection purposes. They work entirely by detecting infrared radiation emitted by or reflected from objects. They do not detect or measure "heat".

The detected radiations are converted into an electrical charge, which is proportional to the detected level of the radiation. Then this charge is further improved by a built in FET and fed to the output pin of the device which becomes applicable to an external circuit for further triggering and amplification of the alarm stages. The PIR sensor range has an effective range of about ten meters (thirty feet), and a field of view less than 180 degrees. Models with wider fields of view, including 360 degrees, are available—typically designed to mount on a ceiling. Some larger PIRs are made with single segment mirrors and can sense changes in infrared energy over thirty meters (one hundred feet) There are also PIRs designed with reversible orientation mirrors which allow either broad coverage (110° wide) or very narrow "curtain" coverage, or with individually selectable segments to "shape" the coverage. 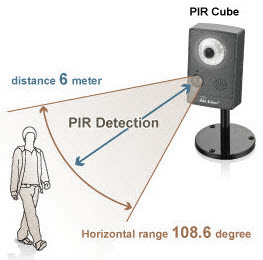 Infrared radiation enters through the front of the sensor, known as the ‘sensor face’. At the core of a PIR sensor is a solid state sensor or set of sensors, made from pyroelectric materials—materials which generate energy when exposed to heat. Typically, the sensors are approximately 1/4 inch square (40 mm2), and take the form of a thin film. Materials commonly used in PIR sensors include gallium nitride (GaN), caesium nitrate (CsNO3), polyvinyl fluorides, derivatives of phenylpyridine, and cobalt phthalocyanine. The sensor is often manufactured as part of an integrated circuit.

The housing will usually have a plastic “window” through which the infrared energy can enter. Despite often being only translucent to visible light, infrared energy is able to reach the sensor through the window because the plastic used is transparent to infrared radiation. The plastic window reduces the chance of foreign objects (dust, insects, etc.) from obscuring the sensor’s field of view, damaging the mechanism, and/or causing false alarms. The window may be used as a filter, to limit the wavelengths to 8-14 micrometres, which is closest to the infrared radiation emitted by humans. It may also serve as a focusing mechanism 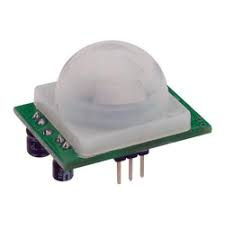 Whenever, human being (even a warm body or object with some temperature) passes through the field of view of PIR sensor, then it detects the infrared radiation emitted by a hot body motion. Thus, the infrared radiation detected by the sensor generates an electrical signal that can be used to activate an alert system or buzzer or alarm sound. 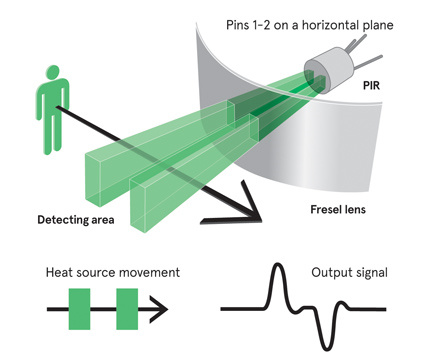 The PIR sensor internally is split into two halves, one half is positive and the other is considered as negative. Thus, one half generates one signal by detecting the motion of a hot body and other half generates another signal. The difference between these two signals is generated as output signal. Primarily, this sensor consists of Fresnel lens which are bifurcated to detect the infrared radiation produced by the motion of hot body over a wide range or specific area.

If once the sensor gets warmed up, then the output remains low until it detects motion. If once it detects the motion, then the output goes high for a couple of seconds and then returns to a normal state or low. This sensor requires settling time, which is characteristically in the range of 10 to 60 seconds.

Different mechanisms can be used to focus the distant infrared energy onto the sensor surface.

The plastic window covering may have multiple facets molded into it, to focus the infrared energy onto the sensor. Each individual facet is a Fresnel lens. 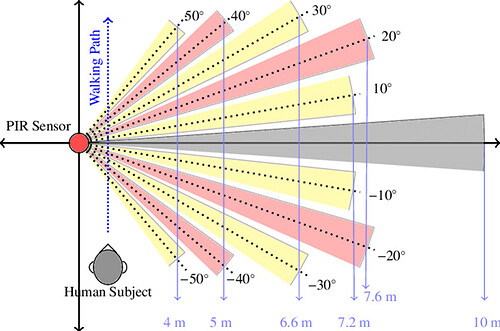 Some PIRs are manufactured with internal, segmented parabolic mirrors to focus the infrared energy. Where mirrors are used, the plastic window cover generally has no Fresnel lenses molded into it. 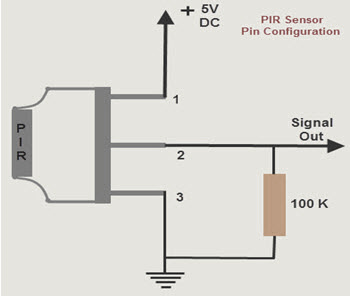 The Passive infrared sensors consist of three pins as indicated in the diagram shown above.

A PIR-based motion detector is used to sense movement of people, animals, or other objects. They are commonly used in burglar alarms and automatically-activated lighting systems. They are commonly called simply "PIR", or sometimes "PID", for "passive infrared detector".

An individual PIR sensor detects changes in the amount of infrared radiation impinging upon it, which varies depending on the temperature and surface characteristics of the objects in front of the sensor.

When an object, such as a human, passes in front of the background, such as a wall, the temperature at that point in the sensor’s field of view will rise from room temperature to body temperature, and then back again. The sensor converts the resulting change in the incoming infrared radiation into a change in the output voltage, and this triggers the detection. Objects of similar temperature but different surface characteristics may also have a different infrared emission pattern, and thus moving them with respect to the background may trigger the detector as well

PIRs come in many configurations for a wide variety of applications. The most common models have numerous Fresnel lenses or mirror segments,

Using differential detection, sensor element pairs are wired as opposite inputs to a differential amplifier. So, the PIR measurements cancel each other and the average temperature of the field of view is removed from the electrical thus the device is not triggerd by sudden change in temperature detection. This allows the device to resist false indications of during brief flashes of light or field-wide illumination. At the same time, this differential arrangement minimizes common-mode interference, allowing the device to resist triggering due to nearby electric fields. However, a differential pair of sensors cannot measure temperature in this configuration, and therefore is only useful for motion detection.

When a PIR sensor is configured in a differential mode, it specifically becomes applicable as a motion detector device. In this mode when a human movement is detected within the "line of sight" of the PIR sensor, a pair of complementary pulses are processed at the output pin of the PIR sensor. In order to implement this output signal for a practical triggering of a load such as a relay or a data logger, or an alarm, the differential signal is rectified using a bridge rectifier and fed to a transistorized relay driver circuit. The contacts of this relay close and open in response to the signals from the PIR, activating the attached load across its contacts, acknowledging the detection of a human being within the predetermined restricted area. 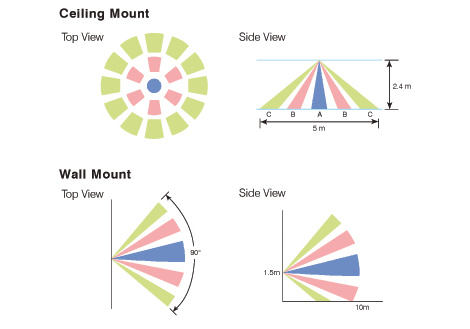 PIRs are mounded in such a way that the PIR cannot "see" out of a window. Although the wavelength of infrared radiation to which the chips are sensitive does not penetrate glass very well, a strong infrared source (such as from a vehicle headlight or sunlight) can overload the sensor and cause a false alarm. A person moving on the other side of the glass would not be "seen" by the PID. That may be good for a window facing a public sidewalk, or bad for a window in an interior partition.

It is also recommended that the PIR not be placed in such a position that an HVAC vent would blow hot or cold air onto the surface of the plastic which covers the housing’s window. Although air has very low emissivity (emits very small amounts of infrared energy), the air blowing on the plastic window cover could change the plastic’s temperature enough to trigger a false alarm.

Sensors are also often designed to "ignore" domestic pets, such as dogs or cats, by setting a higher sensitivity threshold, or by ensuring that the floor of the room remains out of focus.

Since PIR sensors have ranges of up to 10 meters (30 feet), a single detector placed near the entrance is typically all that is necessary for rooms with only a single entrance. PIR-based security systems are also viable in outdoor security and motion-sensitive lighting; one advantage is their low power draw, which allows them to be solar-powered.